Colin O’Brien, 19, of Randolph, N.J., remembers being 16 and having a heart attack on the floor of his former best friend’s basement. It’s uncommon for someone so young to have heart problems, but the attack was a symptom of a heroin addiction that cost O’Brien friends and almost his life.

The message of loss stemming from substance abuse was predominant during the Steered Straight talk Farmington High School students heard on Friday. O’Brien, along with Steered Straight President Michael DeLeon, spoke to a filled auditorium about their struggles with addiction in hopes that future generations wouldn’t make the mistakes they had. The talk was one of several community events addressing substance abuse DeLeon will be holding this weekend.

“I flatlined in the hospital,” O’Brien said. “When they brought me back, I had to be medically induced into a coma for two months, because my body couldn’t handle the withdrawal.” 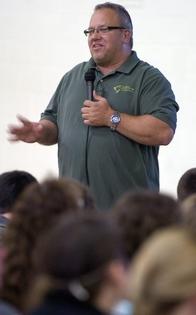 DeLeon, of Vineland, N.J., said his program’s aim is to guide students with information to help them rise above the circumstances that can lead to substance abuse, such as peer pressure or gang recruitment.

“I know kids think about doing it or think drinking or getting high is no big deal,” he told the crowd. “I’m here to ask you to ask yourself: Is it worth it?”

O’Brien has been sober for 23 months, but his road to addiction began when he was 12, when his older brothers turned him onto smoking weed. They eventually turned off drugs to pursue successful careers; he did not.

“By 13, I was taking prescription pills. A year later, I was homeless in Newark, sleeping on the streets, selling drugs to a gang,” O’Brien said. “My mom had to bail me out of jail when I was 15.”

It was his first wake-up call: O’Brien went back to school, where he started playing lacrosse. Playing was difficult, though, because drug use had worn out his body.

Soon his old gang members resurfaced and O’Brien regressed to his old ways. After overdosing at 16 and later being involved in a car accident where he had to be revitalized, his mother sat him down and told him she was tired of seeing him kill himself.

“She begged me to check myself into rehab, and those five months consisted of straight withdrawal,” he said. “But I could only hate myself, because I never said ‘No,’ to drugs, I only said ‘Yes.’”

DeLeon’s addiction started later in life, but was no less fraught with struggle. He told students he had suffered from what he believed was a common disease: “It couldn’t happen to me-ism.”

“I got involved in a start-up company and was making a ton of money,” he said. “One day, this guy laid some cocaine on my desk and told me to snort it.”

His addiction quickly grew out of control: DeLeon lost his job, got involved in a gang, and his wife left with his two children (she later returned). But nothing could quite convince him to seek help—not even when he had to move in with his mother, and gang activity claimed her life. “I came home on Mother’s Day in 1995 at 7:20 a.m., and the door was wide open,” he said. “I went inside, and found my mother on the floor of her bedroom, unresponsive. She had been dead eight hours, strangled by members of my gang who thought I owed them money.”

“I don’t want you to lose your future,” DeLeon told the students. “I’ve traveled the country, and I always hear the same thing: ‘It’s just smoking, or drinking.’ I’m sick and tired of hearing it.”

O’Brien said he was planning to attend Franklin Pierce College in the fall, where he would fulfill his dreams of playing college lacrosse.

“My dreams are coming true, but not without loss,” he said. “I’ve lost 15 people to drugs in the past two years.”

Junior Meagan Henner was struck by how much life experience the two used in their speech.

“I think it’s good they said it started with casual use,” she said. “I don’t think people take that seriously enough.”

“It really drives the issue home for me,” he said. “I think it shows how hard you have to try to not let it into your life, not let it change you.”

Ultimately, both speakers wanted the students to know their lives were in their hands, and what happened to them was their own choice.

“The authorities, your teachers, the government can’t stop the drug problem in this county,” DeLeon said. “Only you can stop it, and your generation is going to do more than we ever did.”