Michael R. DeLeon has been called many things: drug addict and gang member on the one hand, motivational speaker and filmmaker on the other.

In his quest to reach young people about serious life issues, particularly drugs, DeLeon has picked up a couple of other labels: extremist and alarmist for calling the drug problem the worst public health crisis the country has ever seen.

“I think the numbers speak differently,” he said Sunday in addressing those latest labels at a forum hosted by Mercer County Coalition for Drug Awareness. 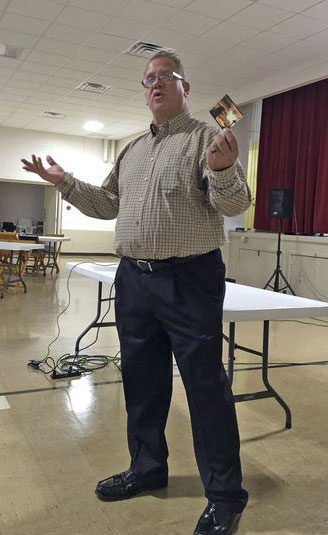 If three people in a local municipality were diagnosed with Zika virus or meningitis, it would be a public health crisis, he said. But, drug deaths don’t get the same attention because drug users are considered “bad” and their deaths the result of their lifestyle choices, he said.

“Those kids are those kids until those kids become your kids,” he said at St. Bartholomew’s Church. “That’s what ends stigma.”

DeLeon doesn’t blame parents for their kids’ addiction deaths, unless they used drugs with their kids.

DeLeon’s path to social advocacy was anything but smooth. The New Jersey man’s addiction to cocaine and heroin led him to crime, which led him to gang activity. He said his bad decisions led to the strangulation murder of his mother at age 63, and he spent a total of 12 years in prison.

The maker of the films “Kids are Dying” and “An American Epidemic” says things that go against the grain in addressing the drug problem, such as criticizing the calling of drug addiction a disease.

“I’ve had cancer twice,” he said. “Cancer isn’t anything like addiction. No one’s breaking into your house because they have cancer.”

Still, DeLeon, who credited God with finally getting him clean, said advocates for change in how we address drug addiction need to come together and “speak with one voice.”

“There is so much chaos in our country that the insurance industry doesn’t take us seriously,” he said. “The pharmaceutical industry is laughing at us.”

There is much blame to go around for the current drug crisis, he said, including: drug companies who market directly to consumers; doctors who overprescribe addictive drugs such as opioids; medical policy setters who stress treatment of pain; legislators who decriminalize marijuana; insurance companies who won’t cover extensive drug treatment programs; and schools who don’t address drug and alcohol issues with their students.

The attendance at the forum, about 20 people, which distressed some associated with the coalition, also is indicative of the problem, DeLeon said.

“The information you take here today, talk to people,” he said. “You certainly have to talk about it.”

The drug problem will get worse and DeLeon said the creeping legalization of marijuana is the issue he worries the most about. While U.S. Attorney General Loretta Lynch has publicly stated pot is not a gateway drug – paving the way to abuse of more dangerous drugs – DeLeon said that it is and that it desensitizes people to the use of mind-altering substances.

While DeLeon says he does not have the answer to end drug abuse, he recommends 30 ways to attack the problem, including a federal law outlawing prescription drug ads; drug testing in schools; scaling back medical privacy laws as they relate to minors to give parents more of a role in determining treatment of their children; better educating physicians on addiction; federal monitoring of prescriptions; and elimination of handwritten prescriptions.

In any event, the problem will get worse, DeLeon said.

“It’s no longer an epidemic,” he said. “Now, it’s a pandemic. A pandemic means it’s everywhere.”