BRIDGETON — In the cafeteria of the Hope Academy on Pearl Street, several dozen grade schoolers sat at rapt attention Thursday morning as Michael DeLeon scrolled through PowerPoint slides of teens and young adults from New Jersey whose lives have been either lost or forever changed due to gang violence.

“Michael Hawkins and Muriah Huff. He was 23 and she was 22, and now they are both dead. They were tortured, murdered, and then the people who killed them buried them in the yard behind a rowhouse in Camden,” said DeLeon. “Here we have the 14-year-old girl who was recently convicted for strangling Hawkins. She was just sentenced to 30 years.”

DeLeon’s message is simple and unadulterated: 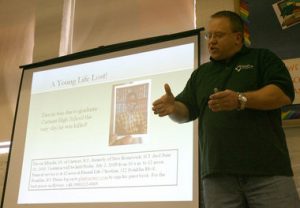 Becoming involved with a gang will lead to death, prison, misery for friends and family, or a mix of all three.

That is not to say it is inevitable because through the Steered Straight program he has founded with several others, he shows the schoolchildren numerous positive alternatives to the violent lifestyle.

Steered Straight Inc. has been a labor of love for DeLeon. He began to work with the organization shortly after leaving prison in 2006.

DeLeon had been sentenced to 10 years in 1995 for committing aggravated manslaughter. He was released after five years, but was sent back for another four for violating terms of his release.

After he was released in 2006, he had to comply with three years of parole, though it appears the parole may not have been necessary.

During the last two years of his sentence, DeLeon was fortunate to be placed in a halfway house, an opportunity he did not waste. For the two years, he worked a full-time job and attended Cumberland County College, receiving associate degrees in criminal justice and public administration.

As of 2011, his associate degree in criminal justice is a bachelor’s that he received from Wilmington University, and he is working on turning it into a master’s. He is also working on a bachelor’s degree in business.

DeLeon uses the examples of his own post-prison drive to establish a respectable life, as well as the drive of many others to succeed by legitimate means, to motivate the kids he talks to.

John Fuqua, who DeLeon says is his partner in Steered Straight, spoke to the schoolchildren Thursday morning about the successes and unfortunate tragedies of his life. Fuqua grew up in Bridgeton and recently returned.

“I lived in Amity Heights in the 80s and 90s. My first day of high school, when I got off of the bus, I could have gone left or right, and me and 12 other guys chose to go left, away from the school,” said Fuqua. “One of them pulled out a bottle of Hennessy, and I drank for the first time.”

Fuqua said he could have continued this behavior, but due to the support of a vice principal, and not wanting to follow in the footsteps of his mother who was addicted to crack cocaine, he decided to change his ways.

“I told myself I wanted to succeed, so I went to class every day that year, and at the end of the year I had perfect attendance,” said Fuqua. “I wasn’t always the smartest, but I played football and worked hard in my classes, so when I graduated I was accepted to every college I applied to.”

After graduating from William Paterson University, Fuqua became a teacher in Jersey City and related how the steady, well-paying job allowed him to live a life most gang members only dream of.

“On the weekends, I could hop on a train and be in Manhattan in seven minutes, or Hoboken. I could send my mom six or seven hundred dollars every month if she needed help. I was living the dream and I said as long as God gave me breath I wouldn’t come back to Bridgeton,” said Fuqua.

That was until his cousin Rakeem Lamar Stubbs called him in 2006 and asked to move with him to Jersey City because Bridgeton’s gang problem was so severe. Fuqua refused at first.

Stubbs called again in 2007, and not wanting to see him descend into a criminal lifestyle, Fuqua moved back to Bridgeton.

Stubbs drifted into trouble despite Fuqua moving back, receiving seven assault charges in a matter of two years, and even beating up a family friend unwittingly.

Instead of being home with his family, Stubbs was out with friends. He was shot and his grandmother rushed to see him at Bridgeton Villas where it occurred. She had a chronic heart condition and died of a heart attack upon seeing Stubbs, who died later that night in surgery.

Though he grieves losing his two family members, Fuqua says he’s an example for how the kids can succeed despite the challenges they face in Bridgeton.

“I’m tired of hearing kids say they have nothing to do. I went to college with kids from Africa who had to walk 20 miles to school and 20 miles back. You are lucky enough to live in a place where you can basically walk anywhere,” said Fuqua.

Without applying himself as much, it seems the future could have turned out differently for Fuqua.

“Of the 12 guys I drank with on the first day of school, five of them are dead now, and four are never coming home,” he says. “They are in prison for life. They were my best friends.”

In addition to Fuqua, Steered Straight has 16 other speakers throughout New Jersey including Thomas Tapeh, formerly of the Philadelphia Eagles.

Steered Straight is a sort of alternative to Scared Straight, the program in which convicts and ex-convicts tell horror stories to children about their incarceration with the goal of making them too scared to commit any crime that could potentially land them in prison.

“A lot of the kids who were participating in Scared Straight actually ended up incarcerated themselves,” said DeLeon.

“The definition of insanity is to do the same thing over and over again,” said Darla, his wife.

Since DeLeon began with Steered Straight, accolades are rolling in from those who think the program is exactly what at-risk kids need.

Michael Dindak, CEO of the Vineland Children’s Residential Center, said they did an “… excellent job communicating positively with our residents.”

Assemblymen Matt Milam and Nelson Albano and Senator Jeff Van Drew said in a joint letter to Middle Township High School that read “… we urge you to take advantage of this real life educational program.”

DeLeon, Fuqua and the other members of Steered Straight are not resting on their laurels though.

DeLeon said they are planning a youth day during spring break at the ALMS Center in Bridgeton. There will be basketball as well as the aforementioned Thomas Tapeh.
They are also planning several college tours, during which DeLeon will take 15 kids in a van to tour a college they could potentially attend. He said he will take any student who wants to tour a college, regardless of the number who sign up.

“I hate to take any credit. I do what I do because I feel like I got a second chance from God. I was in a gang and it ruined my life. I don’t deserve any of this,” said DeLeon. “I just want to teach the kids that everything in the world comes down to what you do and what you don’t do. If you do good things, good things will happen to you. Everything has consequences.”