The teams, each featuring police, code official and clergy representation, arrived unannounced but were welcomed by most individuals they met along the way, with some even tagging along to help distribute TIP411 sheets and reach out to their neighbors. 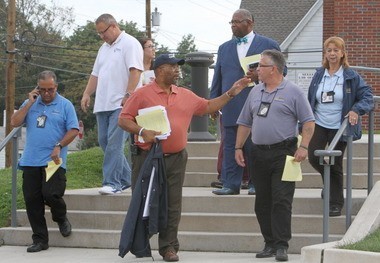 “We’ve got to convince people that there are more people in the community who care than who want to cause problems,” said Michael DeLeon, president of Steered Straight Inc.

Thursday’s door-to-door outreach kicked off a proactive initiative funded through the New Jersey Department of Criminal Justice and designed to go beyond traditional law enforcement methods to foster safer neighborhoods offering a higher quality of life.

Police designated three neighborhoods for the initial outreach: The areas of Henry and South Pine streets, Commerce and Walnut streets and Broad and South Giles streets. Code officials noted violations at more than half the properties encountered on the walks, which illustrated a problem with absentee landlords Mayor Albert Kelly acknowledged before hitting the streets.

“They suck the money out of the community through rent they don’t reinvest in their properties. We want to wake these landlords up and let them know we won’t tolerate it,” said Kelly, referencing a resident who reported a rent increase from $700 to $1,000 monthly at a home believed not to have proper occupancy permits.

Code violations ranged from broken windows and fence-less pools to other problems requiring major fixes, and they were sprinkled among notably well-kept yard spaces, demonstrating the struggle of some to forge a comfortable standard of living.

Violations will result in citations giving a set number of days for response, after which noncompliant landlords or homeowners will be taken to court — a scenario one code official said was the case in the majority of citations issued to out-of-town landlords. The Community Action Teams are funded to conduct walks as frequently as twice a week in order to survey different areas and return to check on progress.

Jonathan Gray, a member of Bethany Seventh-day Adventist (SDA) Church, accompanied the mayor’s team through the neighborhood off Broad and Giles streets on Thursday. Gray said his brother lost his life to street violence after getting wrapped up in a cycle of trouble and incarceration, and he took care to make sure each residence was visited on his path.

“I’ve turned the negative into positive,” said Gray, a singer/songwriter who stopped frequently to chat with family members living in the area and once to celebrate a good catch made by a young football player tossing the pigskin around with friends.

Several groups of children engaged the team, and two kids asked the mayor if they could come along with him next time to help spread the word.

“These kids want to play ball over at that field over there and ride their bikes around, and it’s ridiculous they can’t play where they want and be safe,” said a Mt. Zion Way resident watching a granddaughter and great-niece. “I think this is a great idea, and I appreciate you doing it.”

Resident Gloria Cortez acknowledged the fear of retaliation as a significant and justified obstacle to crime reduction, and the information distributed on Bridgeton’s anonymous TIP411 text-message system in English and Spanish seemed to be of particular interest to many individuals peeking out of their homes. Kelly said if one useful tip was received as a result of Thursday’s walks, it would be well worth the effort.

The mayor acknowledged that overall success of such an initiative will be difficult to quantify but named reduction of gun violence and increased utilization of the TIP411 line as potential measures of achievement that hopefully will inspire future funding for other such endeavors.

“This is designed to shake up the community but also to reassure people that City Hall does care and to develop a strategy to help those who do want to live in a peaceful community,” Kelly said. “This is not a unique problem, but all communities are different, and we need to find a recipe for success for the city of Bridgeton.”

The next Community Action Team walk will be held on Thursday, Oct. 11. Any volunteers who wish to attend are asked to meet at the Police and Municipal Court Complex at 330 Fayette St. at 4:30 p.m.