VINELAND – Following one of the deadliest years in recent local history, community leaders and public officials on Thursday night called for an end to violence in Cumberland County.

In a forum dubbed “Stop The Violence” hosted at Cumberland County College, residents and officials took turns condemning the violence they see as ripping their communities apart.

“The purpose of this event is to make people aware and willing to make a change,” Antoinette Love-Pender, a member of the Vineland African American Community Development Corporation, said at the start of the event.

The event took on the feel of a church service with several song and dance performances in between speeches by community leaders.

The small crowd was urged to keep a focus on curbing violence. 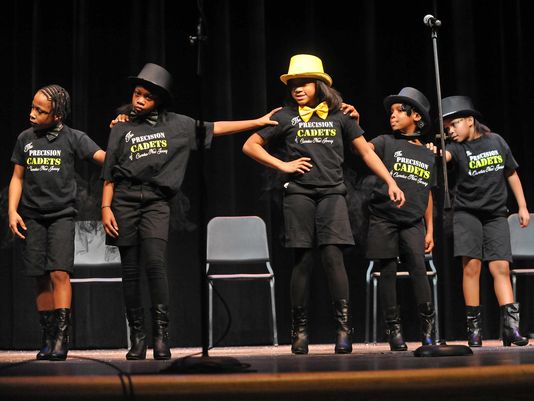 One of the most devastating consequences of any killing, Love-Pender noted, was the effect on victims’ families.

“Everybody has a loved one. It didn’t just affect their family when they lost their loved one, but it affected the other families, too,” Love-Pender said.

Other speakers read off statistics highlighting the dysfunction of institutions like the prison system and even home family dynamics.

Pastor James Johnson talked about the lack of paternal influence on youth who have parents locked up in prison.

“Did you know that 17 percent of people arrested are under the age of 18, and most of them come from fatherless homes?” he said. “The man is the power source of the home, and we need to get him back in there.”

One idea Johnson suggested was to create a network to help get men out of prison, get jobs more easily as ex-convicts and back into father roles in their families.

“Let’s get our fathers back into the home,” he said. “We’ve got to show our young men that they have to depend on their father, not that brother down the street in a gang.”

Michael DeLeon, founder of Steered Straight, also had some ideas about reforming the rehabilitation system in state prisons.

The keynote speaker, Cumberland County Prosecutor Jennifer Webb-McRae, urged parents to take greater responsibility in raising their children by ensuring they resist the appeal of gang culture and embrace virtues like empathy and community responsibility.

“We need to educate our children and talk to them about the scenarios that they might find themselves in,” she said. “It’s important to speak with your children of the danger of being around weapons and possessing weapons. We also have to address with our children the lack of empathy and a sense of responsibility towards the community.”

She continued, “How is it that we live in a time when rappers … can glorify and promote the harboring of those who commit violence against others? How can we allow games like Grand Theft Auto that glorify criminality to be the highest selling game in history? I believe the only true solution to ending violence is being committed to non-violence.”

Here’s a look at homicides, by year, in the county:

• January 16: Jermarl Dawkins, 34, of Bridgeton. Police have charged both Troy Donini of Vineland and Paul Willoughby, Fairfield Township, in connection with the crime.

• Feb. 15: George A. Lewis, 36, of Bridgeton, was shot once outside of his Spruce Street residence. Police arrested Michael Russell Jr., 20, of Henry Street, in connection with the crime.

• March 22: Benjamin Broughton, 29, of Port Norris, was fatally shot in the face at his home. Police have charged Errick L. Young, 20, of Millville, in connection with the crime.

• Eugene Tabinowski, 85, of Laurel Lake, was stabbed to death inside his home on March 21 and died the next day. Michael Duberson of Millville was charged with killing the man.

• April 14: Arthur Rease, 39, of Vineland, was shot in the back at his home on the 500 block of East Park Avenue. No arrests have been made.

• May 20: Delshawn Harris, 20, and Pablo Caban, 20, both of Millville, were shot in a Buck Street driveway. Kevin Lamar Hall, of Millville, has been charged with murder.

• July 1: Reuben Jacobs, 36, of Garfield Avenue, was found shot to death on a Bridgeton sidewalk in the 200 block of South Avenue. No arrests have been made.

• Aug. 11: Quantasia Bessix, 20, of the 300 block of Cohansey Street in Bridgeton, was shot in the back during a drive-by shooting. Police charged Ralph Peter Jamison with the killing.

• Aug. 24: The body of 37-year-old Jennifer Cruz-Chavez was found by a group of hunters in a wooded area off Buckshutem Road in Fairfield Township. Authorities said the cause of death was multiple blunt-force trauma. Police charged Bridgeton residents Jose Martinez and Omar Galvez with her death.

Five men were charged in October with the August slayings of Ortiz and Eduardo.

• Nov. 14: Jerome Chestnut, 27, was found shot to death at Oakview Apartments in Millville. No arrests have been made so far.