At six months in, 2014 is on pace to be the county’s deadliest in 20 years. ∙ With the shooting death of a Bridgeton man on July 1, the county has recorded 11 separate slayings throughout the area. ∙ The tally is six more than occurred in all of last year, and four more than in 2012.

With 10 slayings reported in both 2010 and 2011, and eight reported killings in 2009, this year has been the most violent since 2008, which had 16 reported homicides according to the New Jersey State Police Uniform Crime Reports.

And if the rate of homicides continues at its current pace, 2014 will end up being the deadliest year in Cumberland County in more than two decades. The last time homicides happened so often was in 1993, when 21 people were slain, according to UCR statistics.

Government officials and local police departments have been scrambling to come to grips with the wave of violence sweeping through the county.

“Unfortunately, Cumberland County seems to be a target by gangs and drugs, and I know each municipality is making every effort to try to control these random acts of violence,” Cumberland County Freeholder Director Joseph Derella said.

“The spike in homicides is certainly a concern to us,” Cumberland County Prosecutor Jennifer Webb-McRae said. “We’re working on it on two ends — both proactive and reactive.”

On the reactive side, Webb-McRae said, “there are a lot of collaborations between law enforcement agencies that we can’t talk about.”

On the proactive side, the prosecutor praised recent county initiatives such as the Cumberland County Positive Youth Coalition for its effort in preventing violence by offering disadvantaged children options before they follow their parents into lifestyles of violence.

“We obviously have to educate our children about the dangers of violence and empower them to make healthy choices,” she said. “One thing that we find in Cumberland County is that the problems that we have tend to be throughout the county rather than in isolated areas.” 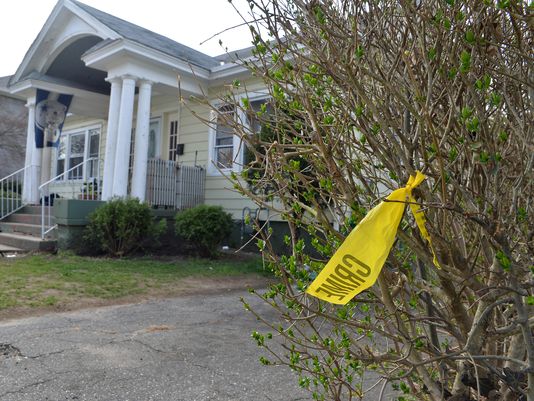 The deadly year started January 16, when Jermarl Dawkins, 34, of Bridgeton, was shot and killed in a field near a Bridgeton apartment complex. Police eventually charged Troy Donini of Vineland and Paul Willoughby of Fairfield Township with murder, conspiracy and weapons offenses.

A month later, George A. Lewis, 36, of Bridgeton, was shot outside his Spruce Street residence. He had been hosting a party when an altercation broke out. Police charged Michael Russell Jr., 20, of Henry Street, with murder and weapons offenses in connection with Lewis’ death.

Benjamin Broughton, 29, of Port Norris, was shot in what police said was a custody dispute. Errick L. Young, of Millville was charged with Broughton’s death. He was captured in Camden County in April after fleeing officials.

Eugene Tabinowski, 85, of Laurel Lake, was stabbed to death inside his home on March 21 and died the next day. Michael Duberson, of Millville, was charged with killing the man, who police said hired the suspect as a gardener.

April 13 marked the first of two deaths in separate, but connected shootings apparently tied to a home invasion.

Police charged Aleshio Jones, 22, of Vineland, with shooting Candelario. No arrests have been made in Rease’s killing.

On May 20, friends Delshawn Harris, 20, and Pablo Caban, 20, both of Millville, were shot in a Buck Street driveway following what investigators said was a planned street fight turned deadly. Kevin Lamar Hall of Millville has been charged with murder in the men’s deaths.

James B. Collins, 22, of Millville, was shot and killed in the 1000 block of Church Street. Police said he was sitting on a porch when shots were fired. Collins went into the home, lay down and died, officials said. On Aug. 8, police said three men had been charged in connection with Collins’ death.

The county’s 11th violent killing happened on July 1 in Bridgeton. Reuben Jacobs, 36, of Garfield Avenue, was apparently in an altercation just before he was shot on the 200 block of South Avenue, police said. No arrests have been made.

In the short-term, the spate of violence in Millville has prompted the city to call in the New Jersey State Police for extra help in patrolling trouble spots, particularly in the 3rd Ward.

State police already have a large presence in the county, with patrol routes throughout the various townships. Bridgeton, Millville and Vineland each have their own municipal police departments.

In Vineland, a rash of home invasions in May and other gang-related violence has the police expanding the roles of traditionally non-reactive officers to help prevent violence before it happens.

“We’ve definitely seen an increase in violent crime this year so far,” Vineland Police Chief Tim Codispoti said. “To address it, we’ve devoted some more resources in our criminal division. We’re asking our narcotics people and detectives to really re-double their efforts to gather intel.”

Most of the crime, Codispoti said, appears to be gang-related.

“It’s between different factions — a lot of it over narcotics,” he said. “We’re doing our best.”

City residents flooded a recent City Commission meeting to vent their frustrations with the flood of violence in their neighborhoods.

Many highlighted themes that officials hope to tackle to prevent future violence, including attacking root causes such as poverty and unemployment.

“From a county perspective, we’re trying to work short term and long term to address those core issues,” Derella said. “Anytime you have unemployment, poverty … you put all those things together and it’s a formula for problems.”

The Cumberland County Positive Youth Development Coalition owes its roots to a Vineland program and has been expanded to now include 70 different agencies, including police departments in Bridgeton, Millville and Vineland; the Cumberland County Sheriff’s Department; various churches and faith-based organizations; community groups; service providers and local schools to target problems and provide solutions on a place-by-place basis.

The goal, officials say, is to both prevent children from entering the state’s juvenile justice system and help prevent those in the system from becoming future adult offenders.

The early intervention program has been so successful, officials say, that New Jersey Acting Attorney General John Hoffman has stated it may be used as a national model.

“We are looking very hard to try to control juvenile crime,” Derella said. “We are trying to address the problem as quickly as we can to try to prevent the pattern.”

Michael DeLeon, who spent more than a decade in state prison on drug charges, runs the Vineland-based Steered Straight program, which is based on early juvenile intervention, and is a participant in the coalition.

“We have to take a totally proactive approach,” DeLeon said. “We have to inspire (children) to not follow in their parents’ footsteps, and that they can be anything they want to be. The whole cycle is real, but these programs work.”

DeLeon said another issue indirectly contributing to violence in the county is the lack of programs available to prisoners, along with the many stringent restraints the inmates face after their release.

“They’re not eligible for Pell Grants — they have to go through hoops to get into college or get a GED,” DeLeon said.

“Applications are thrown away as soon as they check off the box,” he said, referring to the “ex-offender box” on job applications.

“We need to remove that box from applications to give them at least a chance at an interview. We make it almost impossible for an ex-offender to get a job. They have nothing to put on a resume.”

“We have to get people involved in the community so they can contribute to society,” DeLeon said.

DeLeon said he hopes funding will one day become available to establish a re-entry program for adult offenders returning to Cumberland County.

“There’s a lot of them,” he said. “If they come home and believe they can’t get into school or can’t get a job, they’re going to do what they think they need to do to survive and return to a lifestyle they were used to.”

Another issue DeLeon said he believes people don’t want to address is large amount of prisons in Cumberland County — three state prisons and one federal facility.

Many ex-offenders leaving prison relocate in the county, DeLeon noted, and tend to bring their former gang lifestyles with them.

“We’re in a perfect storm in Cumberland County,” DeLeon said. “We’ve unfortunately brought out-of-county offenders into the county, and if we’re going to continue that then we’ve got to do things differently. We’ve got to figure out a way to get them productive.”

Officials also hope the planned full time Cumberland County Technical School — which is set for construction this fall — will make an impact on future violence rates by offering county residents a specialized education.

“The tech center is going to really change our county,” DeLeon said. “I just believe that we’re going to do a lot more things.”

Officials say another method to curtailing violence may be to turn to local residents themselves, whose assistance they say is vital to local law enforcement efforts.

“You see something, you speak up. We have to have people stand up in the community and address the situation, as well.”

“The core issues keep coming back to gang activity and drugs,” Derella said. “You can fight that with a police officer on every corner, or you can stand up and say enough is enough.”

Just halfway through the year, the number of homicides in Cumberland County for 2014 is already higher than all that occurred in 2013. Here’s a look at homicides, by year, in the county:

Eleven people have been killed in Cumberland County this year, putting it on pace to be the deadliest year in two decades.

• January 16: Jermarl Dawkins, 34, of Bridgeton. Police have charged both Troy Donini of Vineland and Paul Willoughby, Fairfield Township, in connection with the crime.

• Feb. 15: George A. Lewis, 36, of Bridgeton, was shot once outside of his Spruce Street residence. Police arrested Michael Russell Jr., 20, of Henry Street, in connection with the crime.

• March 22: Benjamin Broughton, 29, of Port Norris, was fatally shot in the face at his home. Police have charged Errick L. Young, 20, of Millville, in connection with the crime.

• Eugene Tabinowski, 85, of Laurel Lake, was stabbed to death inside his home on March 21 and died the next day. Michael Duberson of Millville was charged with killing the man.

• April 14: Arthur Rease, 39, of Vineland, was shot in the back at his home on the 500 block of East Park Avenue. No arrests have been made.

• May 20: Delshawn Harris, 20, and Pablo Caban, 20, both of Millville, were shot in a Buck Street driveway. Kevin Lamar Hall, of Millville, has been charged with murder.

• July 1: Reuben Jacobs, 36, of Garfield Avenue, was found shot to death on a Bridgeton sidewalk in the 200 block of South Avenue. No arrests have been made.