Education: One of the Keys to Breaking the Cycle of Incarceration

COURT HOUSE – Members of the community attended “Breaking the Cycle of Incarceration,” a panel discussion presented by the Cape May County Human Relations Commission May 5. The event was held to raise awareness of the many challenges facing children of incarcerated parents and to discuss programs and strategies that will address their needs. 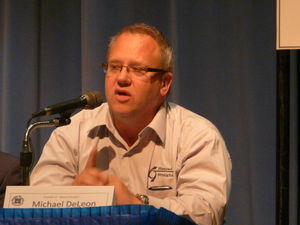 “I’m sure all of us, at one point, know someone who has been incarcerated,” said Felicia Smith, chair of the Human Relations Commission. “It’s a hard thing to deal with, especially when you see the children and how it affects them.”

“At least 1.8 million children in New Jersey have a parent in prison,” Peeler said. “Children of incarcerated parents are more likely to have significant family and residential instability and are more likely to face foster care than other children.” Peeler asked the audience to put themselves in those children’s shoes. “What would you think about the police if they took your father or mother away? We have to consider the psyche of the child.”

Taylor, reporting other statistics, said that there are far too many nonviolent offenders in the New Jersey state prison system.

“We literally have tens of thousands of people in prison that aren’t getting the appropriate services they need. When they are ready to get out, their pre-release is not good enough to give them a good start in becoming productive members of society.”

Taylor quoted a Pew study that showed 42 percent of persons released from prison were re-arrested within three years. “The state of N.J. spends $54,865 for each inmate that it puts in prison every year and a large percentage of them are non-violent addicts,” Taylor said. “Those people should not be in prison. $1.2 billion is spent on the New Jersey correctional system each year and a big portion of that is a waste of money that should be spent here in Cape May County for services. The system is bad.”

In their annual report (released in February) Middle Township Police Department outlined a goal to divert juveniles from entering the criminal justice system. To do that, the police department “uses station house adjustments to draw contracts with parents of juvenile offenders,” Leusner said. In lieu of charges, individualized contracts ensure that parents of juvenile offenders get their children the proper treatment they need from various programs/services available in the county. Cape Assist is one such program that is geared toward substance abuse prevention and treatment for juveniles. It is the hope that with early treatment and education, juvenile offenders will be less likely become repeat offenders and the cycle of incarceration can be broken early.

“Unfortunately, we aren’t going to solve this tomorrow. I wish we could.” Leusner said. “We have to be thinking about five and 10 years down the road. How can we bend this cycle? … Just over half inmates in prison are parents of children under the age of 18. And of those parents in prison, 50 percent of them had a parent in prison.”

In Camden, Davis’ focus is on community stabilization, redevelopment and revitalization efforts. He developed an initiative called the Camden Dream Center that features programs that, Davis says, address complex issues facing troubled youth, men’s issues as they relate to fatherhood, addictions and others.

In November 2013, the Camden Dream Center received certification from the N.J. Department of Education and the Department of Labor to operate its own private vocational school. With these efforts, Davis and his community are making strides toward breaking the cycle of incarceration, mainly with the implementation of further education for offenders (and non-offenders). “The vast majority of incarcerated males are men of color and are suffering from education deficiencies,” Davis said. “They aren’t able to function or think critically, even at a ninth grade level.

“We need to re-dream,” Davis said. “When you build it and you build it right – whether it is a small program at the local YMCA or a lateral program similar to the one that we’ve constructed in Camden – I believe there will be more people in the community that need it, will come to it and will benefit.”

Davis finished by saying his community doesn’t only focus on the individual or the juvenile offender, but on the entire family.

“Schools today are being charged with having every child college ready by the time they leave our doors,” Kopakowski said. “That’s a difficult task when the child comes from a stable family, let alone when they come burdened with some of the issues we’re talking about today.”

Kopakowski blamed poverty as having a lot to do with crime. When he arrived in Middle Township in 2003, Kopakowski said that 20 percent of the children in the schools were on the free lunch program (which means those children qualify for free lunches at school based on their family income). Today, that number has doubled to 40 percent.

Kopakowski said staff members and teachers in Middle Township schools work with children of incarcerated parents on a daily basis. He admitted that it is “extremely difficult” and that the school district needs to “come together with parents and community to create programs that adhere to the needs of all students. I firmly believe that every child can succeed if given the necessary tools to do so.”

The Scared Straight program, Hamer said, was successful and needs to be implemented more in schools. “Children need to see firsthand, how bad it is to be a prisoner.”

Hamer then spoke of one inmate in particular who told students his own story about when he was in college. The inmate’s mother’s boyfriend was mistreating her and disrespecting him. He went to his car, got a shotgun, came back to the house and shot the man in the head, killing him. The inmate went on to tell the students that his life in prison now isn’t really even living. “I think it was very impactful for them to hear stories such as these, from the prisoners themselves.” Hamer said.

Incarcerated for 12 years, DeLeon admitted to being involved with two gang-related homicides, one that caused the death of his own mother on Mother’s Day 1995.

“Re-entry does not exist in the state of New Jersey,” DeLeon said. “I’m not a victim. I hate victim-stance. But we have programs in N.J. Department of Corrections that do not prepare people to renter the job market and the community.”

“Employment,” DeLeon said, “is the second most important aspect of rehabilitation. The third biggest component in reducing recidivism is contributing to society.”

Several members of the community were also allowed to speak at the event. William Smith, an ex-convict who served six years in prison for selling drugs, now faces a new reality: one of his children is currently incarcerated.

“The cycle is not going to change unless we change it,” Smith said. “I was always told that a community is only as strong as the people who are in that community. The bottom line is: how can we reach our kids? I thank God that I had a mentor who taught me the things I was doing wasn’t right. And I was shown a better life. These are the things I’m trying to show my kids and the other kids in the community.”

Let’s Talk About It

The Human Relations Commission will be launching “Let’s Talk About It,” a support group for children who want to express their feelings about their incarcerated parents. The first meeting will be June 12 at 6:30 p.m. in the Family Success Center, Rio Grande. For information, contact Smith at 231-3109.