VINELAND — About 40 students at the Cunningham Alternative School got a message from two former professional football players that hard work and making the right choices can make dreams come true.

The message came Monday from Thomas Tepah and Hank Poteat, who both said they had to overcome obstacles to not only be successful on the football field, but in life in generals.

While both men played professional football, their backgrounds could not be more different.

Tepah told how he was bullied because he could not speak English after he and his family moved to the United States from Liberia in 1989. He explained how he overcame debilitating injuries in college and while playing fullback with the Philadelphia Eagles.

“If I can come here and be successful, so can you,” Tepah said. “So many times I could have given up. But I didn’t.” 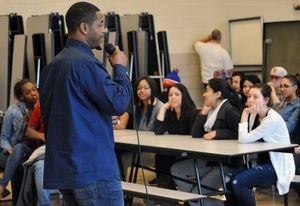 For Poteat, a defensive back, success came despite being cut eight times by NFL teams, and by opting to distance himself from friends whose gave into drugs and other behavior that did not fit his game plan for success.

Poteat and Tepah also stressed what they said was the most important lesson: Get an education and respect those people who are there to help along the way.

“You got to have to believe in your teachers, your parents, your coaches,” said Poteat. “My teachers, my parents, my coaches helped keep me in the right direction.”

“I didn’t want to listen, but thank God I did,” Tepah said.

Monday’s program was presented by the Millville-based Steered Straight.

The organization was founded in 2000 by Michael DeLeon, who had spent 10 years in prison on murder and drug charges and another two years in a half-way house. DeLeon said he started Steered Straight, which has given presentations to more than 1 million throughout New Jersey and other states, to help youths make better career choices.

“I don’t want my past to become their future,” said DeLeon, a 48-year-old local resident.

One of the students — 18-year-old senior Josh Rosa — said that Poteat, Tepah and DeLeon provided a “great message.”

“It really touched me,” said Rosa, who wants a career in competitive skateboarding. “It motivates me to be successful.”

There was no way of telling how many other students were affected by Monday’s program. One student kept his head on the desk for most of the presentation, and a few others appeared to pay little attention to the talks.

However, Rosa said that can be deceiving.

“I know it touched some of the kids,” he said.

The Cunningham Alternative School houses many of the school district’s specialty programs. Some of its students include those with learning and discipline problems.

Carol Rush, a school guidance counselor, said students often respond to the messages delivered by people such as Tepah and Poteat.

“They are icons,” she said. “They share their own life stories.”

Rush said a lot of students in the school also need extra direction to make their life dreams come true.

Poteat told the students that, despite what they think, they can achieve their dreams.

“If you want to be successful, you can’t just sit back and chill,” he said. You’ve got to get up and make a decision to go for it.”