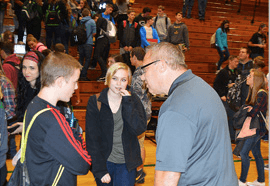 Michael DeLeon and Crystal Vallee spoke to students about staying away from drugs as part of  a four–day tour of area schools. DeLeon, who runs a non-profit organization called Steered Straight, travels the nation to talk to students about the dangers of drug addiction.

DeLeon said he wants kids to stop dying. After being released from prison, he became a drug counselor. He said he lost four kids of the 26 he was counseling to  overdose.

DeLeon said he took the deaths hard, and the experience motivated him to make films and speak to students in schools.

He shared his past life of  gangs and drugs with the students.

Deleon said the government was unlikely to be able to solve the drug epidemic, but the next generation of high school graduates could.  He encouraged students to speak out about positive things, have conversations with their parents about drugs and alcohol and “stay in their lane.”

“I never thought it could happen  to me, ” DeLeon said.

He was hooked on cocaine the first time he tried it.

He told students he spiraled into a life of drug addiction and gang activity in his native New Jersey.

He said he found his mother murdered on Mother’s Day, a crime that he said was committed by his former gang mates, in retaliation  for a drug deal gone wrong. Police eventually charged DeLeon with the murder. DeLeon, not wanting to risk a jury trial, said he took a plea deal and was sentenced to five years in prison, he said.

DeLeon maintains he didn’t kill his mother, but he said he was 100 percent responsible for her death by  living a life of drugs and gangs. After he got out, he began to run with his old gang and was present at a  homicide. That incident resulted in his parole being revoked and spending seven  more years in prison.

He told the students to write their own stories of their lives.

“Don’t let your story become my story,” he said.

Vallee was released from prison 10 months ago after serving 5-1/2 years on a vehicular manslaughter charge in New Jersey.

She told students that her problems began when she didn’t seek help in dealing with the murder of her best friend and abusive stepfather.

“I don’t want anyone to feel sorry for me. I ran from my problems,” she said.

Rather than turning to teachers and counselors who could’ve helped her, she turned to drugs, she said.

She encouraged the students who are hurting to seek out counseling or others who can help work out their issues.

DeLeon said the organization may be looking at setting up an Indiana office.