‘The founder of Steered Straight, a Vineland-based non-profit which aims to direct children toward positive choices that keep them away from drugs and out of the prison system, beat the overwhelming odds that individuals who enter into the state’s prison will end up back behind the same bars.

DeLeon, who spent a decade in prison for aggravated manslaughter charges, spoke on his journey toward sobriety and what he’s seen as an overwhelming need to revamp the way the corrections system works to a room full of police chiefs, parole officials, correctional officers and others in law enforcement at Rowan College of Gloucester County on Friday. 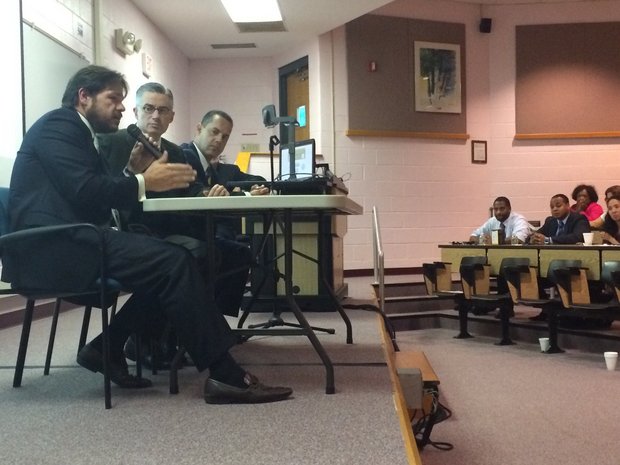 All were there for one reason — to face the flaws of the state’s correction system, and find ways to fix it.

The officials came from all over the state for the first “Gloucester County Reentry Conference,” where they heard not only stories like DeLeon, but real-life results from people who have worked to shift the system to focus on the underlying cause of 70 percent of all incarcerations — addiction.

“What was accomplished in Jersey City and Hudson County can be replicated throughout the state,” said McGreevey, who has made inmate reentry issues the focus of his post-political career, after the Friday event.

He said through their work — Jersey City’s new prisoner re-entry center Martin’s Place opened its doors last month — they’ve been able to use federal grant funds to fund programs and reduce the recidivism rate for women in their program to just 24 percent, down from 53 percent.

The key, McGreevey said, is to ensure that individuals receive treatment for their addictions and maintain that sobriety while working. Buy-in from companies willing to hire ex-cons, often as a part of tax abatement or deals with the city, has played an important role in their success, as well as cooperation from local law enforcement.

“If people merely spend time behind bars doing nothing, it is a sad, sinful waste of time,” said McGreevey, adding it doesn’t just waste time, it wastes an astronomical amount of taxpayer funds.

“To send a person to jail costs $45,000 a year. That’s a substantial amount of money that the taxpayers are spending, and if treatment costs half of that amount, and is more successful, then treatment ought to be the preferred option.”

It was worked for DeLeon, who spoke emphatically about the role parole and correctional officers played in his ability to secure treatment for his drug addiction and pursue a passion for helping others who struggle with both addiction returning to society after being incarcerated.

“Why should’t reentry begin at entry?” DeLeon asked. “Why would we not prepare people for release?

Too often, he said, getting locked up isn’t seen as a negative consequence in many communities, it’s seen as an inevitable “right of passage” and that a change in culture and way of thinking has to be at the root of a transformation of the system — for both at-risk and incarcerated people, and the law enforcement professionals who work with them.

“Neither one can do it without the other,” said DeLeon.

That’s the idea that brought seven police chiefs from throughout the state to Friday’s conference, including Washington Township, Gloucester County, Police Chief Rafael Muniz. Often, his officers are the boots on the ground that see offenders the first time they enter the criminal justice system, and many times after that.

“We’re all looking for a solution,” said Muniz. “If we can help them get treatment and the help they need, maybe they have chance.”