Listening to a presentation at Bergen Community College, titled “Caught in the Web: Heroin Addiction” the 27-year-old personal trainer blended into the crowd of mostly 20-somethings who stopped into the all-day event between classes.

Then, he moved to take his seat at the panel, where he told the dozens of attendees inside the Moses Family Meeting and Training Center that a weight-lifting injury at 19 got him a prescription for Oxycodone.

“I loved it,” said Gary, who asked that his last name not be published because he is in recovery. “Pills became too expensive and heroin was a whole lot cheaper.” 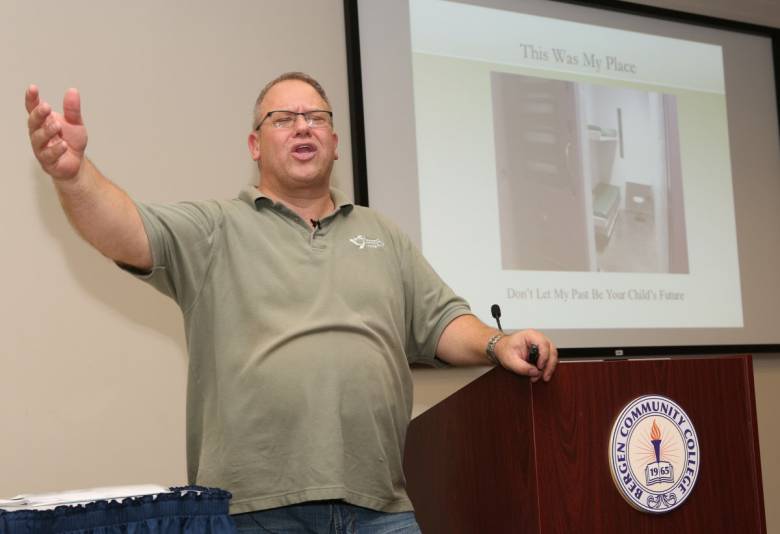 The tale is one that resonates throughout New Jersey, said the event’s keynote speaker, Michael DeLeon, a Vineland man who has made it his mission to inform whoever will listen about the danger of drugs in general and the heroin epidemic.

Parents don’t start young enough in talking to their children about drugs and they don’t do it often enough, DeLeon said. By the time they’re doing heroin, “you have a problem you might not win,” he said.

DeLeon founded the non-profit Steered Straight back in 2000 after serving 12 years in jail for drug-related crimes.

He fell in with a Newark street gang and did whatever he could to support his addiction. His wife left him so he moved in with his 63-year-old mother.

“I went missing for three days,” DeLeon said. “I went off on a drug binge because I was being held responsible for what happened.”

When he finally went home, on Mother’s Day in 1995, to the Rockaway condo he shared with his mother, he found her strangled to death on her bedroom floor – in retribution.

Things went bad again shortly after a 5-year prison sentence when injuries from a car accident resulted in 9 drug prescriptions – one of which was Oxycontin, he said. DeLeon was soon seeing 27 doctors, abusing drugs and back into gang life.

Another drug transaction went bad and five gang members came into his home, held a 9mm handgun to his 5-year-old daughter’s head, banged his wife’s face off a kitchen counter and chipped two of her teeth while sticking a gun down her throat. “They realized I didn’t have the money,” he said, so the group brought DeLeon to confront another party involved in the deal, and they shot and killed that man.

DeLeon was one of six people charged with first degree murder. The charges were later dismissed but he was sent back to prison for seven more years for violating probation.

“Twelve years away from my wife and family,” he said. “I just want to solve this problem.”

One of the biggest contributors, he said, “our remedy for everything is a pill.”

Agatha Rodolfa, 17, of Hackensack, a student who attended the presentation, said she was surprised to hear the role that prescription drugs play in the heroin epidemic. “Things that are supposed to be safe are not,” she said. “When a doctor says you should take it, you believe them.”

Gary M., now three and a half years sober, said the stories he heard Thursday made him see drug addiction from the other side.

“I’ll never forget my father asking me one time, ‘don’t you see what you’re doing to the family,’” Gary recalled. “I remember screaming back in his face ‘I’m not hurting anybody but myself.”

“When I hear from the other side it really makes me see how that’s not the truth.”

Sgt. Hector Carter, of the Bergen County Prosecutor’s Office Narcotic’s squad, said annual drug deaths in Bergen County are on track to exceed last year’s number. And that of the 58 deaths so far, 53 have been opiate related.

Narcan, the heroin reversal drug, has been used 175 times this year and 34 of those were not successful, he said. So far, the drug has been used more than 200 times in Bergen County since it was made available to emergency responders.

“This truly is an epidemic and we in law enforcement cannot fix this by ourselves,” Carter said. “Education is everything.”