Michael Deleon, John Fuqua and retired NFL player Thomas Tapeh were guests at North Warren Regional Middle and High Schools at an assembly supporting the idea of making the right decisions. The program was under the direction of Student Assistance Counselor, Tina Ritchie. Ritchie received the funding, for the program, from the “North Warren 2000” Non-Profit Organization.

Deleon, Fuqua and Tapeh are part of the “Steered Straight” organization that promotes the initiative to treat others as you would like to be treated. Deleon was imprisoned for 10 years due to poor decision making while being involved in a gang. Fuqua’s life drastically changed when his nephew made the poor decision of becoming a bully, which later cost him his life. Tapeh was bullied in his childhood because he was from Africa. Tapeh after being told he would never walk again due to athletic injuries, persevered and worked to become a member of the Eagles football organization participating in the 2004 Super Bowl. He shared an inspiring message that touched many of the students. 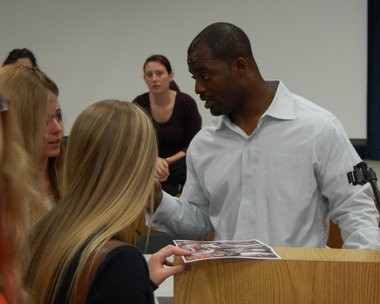 The three men came from different past experiences but all told stories that shared a common message “Stay in Your Lane.”

The students of North Warren applauded the thought-provoking program and received the messages loud and clear. Junior Mason Ryzoff and senior Sarah Hanelt both agreed “the program made us realize that we all must go above and beyond and reach out to those who may not be as fortunate as we are.”