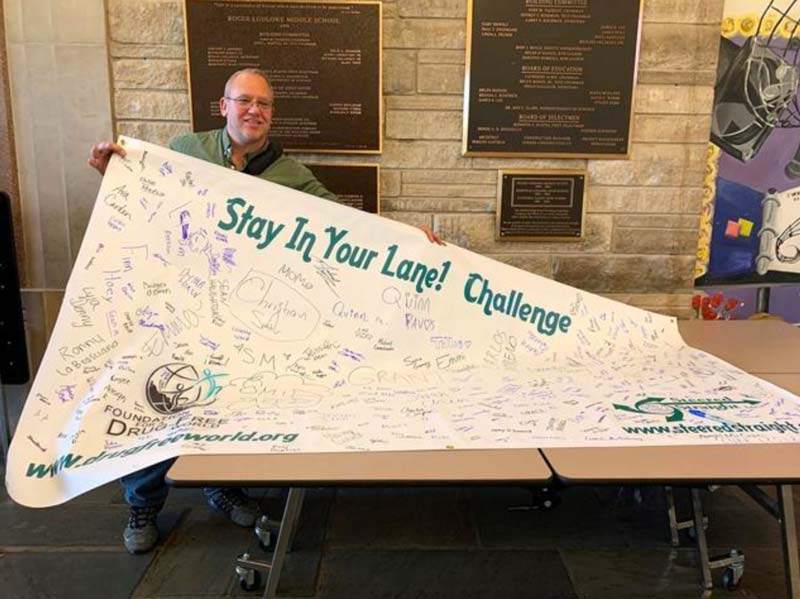 The Newtown Parent Connection’s (NPC) founder said the messages shared with local students at the group’s November 7 forum on the dangers of vaping was so powerful that word is spreading to other districts hoping to engage the same program.

“We heard following Michael’s presentation in Fairfield, which the Parent Connection helped organize, that kids were walking up to him thanking him for telling his story — and some were actually turning in their Juul [vaping devices] saying they had no real idea of the dangers of vaping,” MS Carolan said.

Mr DeLeon is among the nation’s leading presenters on topics related to the dangers of addictive substances and founder of Steered Straight.

The speaker candidly discussed with Newtown Middle and High School students, as well as some parents and educators, his long but ultimately successful transition from being an ex-offender who after nearly eight years of drug addiction and gang involvement, spent 12 years in state prison and halfway houses for a gang-related homicide.

Mr DeLeon’s nonprofit, Steered Straight Inc, was formed in 2000 and works to carry an important message to youth on the extreme dangers of drugs, gang involvement, and associated criminal activity.

Steered Straight’s program reaches out to children, teens, and young adults with a message of reality about life choices and the importance of consequential thinking so that they understand that there are consequences to their actions.

“At the beginning of his talk, the kids and even the teachers and I were probably caught a little off guard because he dwelled so long on his family situations,” MS Carolan admitted. “But without that background, his strongest messaging about how individual decisions sometimes have negative, life-changing consequences for other loved ones may not have hit home like I think it did.”

Ms Carolan appreciated how Mr DeLeon used CDC stats to support his presentation, but that he did not just throw them out without incorporating them into the bigger story.

“I liked how he talked about the millions of dollars vaping companies, and particular, Juul has spent on marketing their products — and how that marketing has great appeal to young people,” Ms Carolan said. “Maybe someone who smokes two packs of cigarettes a day might be able to quit using a vaping device as an alternative, but that is obviously not these companies’ targeted consumer — especially when they’re advertising flavors like strawberry and watermelon.”

“Michael talked about how he was worried that kids who are addicted to vaping would now turn to online sources to obtain flavored vape cartridges, and who knows what may be in those products, or even where they come from,” she said.

Ms Carolan said she gained more insight into how vaping devices that kids might use now could be adapted and used to vape illegal and dangerous drugs, including opioids.

“It’s not a huge leap to thinking kids who are vaping fruity nicotine cartridges could eventually use these same pens and vape devices for illegal drugs — and we’re already seeing hundreds of people being hospitalized and some even dying from doing that,” she said.

At both his appearances in Newtown, as well as at his talks the previous day in Fairfield, Mr DeLeon brought banners for students to sign onto the “Stay In Your Lane Challenge,” which challenges all who sign on to quit vaping for seven days.

“I had been looking for the right presenter on the subject of vaping dangers, and Tim Morris, our Parent Connection Help & Support facilitator for Newtown and Fairfield/Milford told me about Michael DeLeon,” Ms Carolan said.

“When I learned he was available, Tim helped us coordinate bringing in for one day in Fairfield, where he’s presenting the same format to Ludlow High School’s upper class during the day and appearing at the school’s freshman forum at night. So we were able to arrange bringing him up to Newtown the next day.”

Threat ‘Greater Than Ever’

According to Mr DeLeon, “We are in the worst public social health crisis America has ever seen, and with vaping/Juuling, marijuana legalization, and a culture that literally grew up with pills marketed as the solution for every human ailment — the threat to our youth is greater than ever.”

He believes the gap between what parents need to know and current trends is growing, and “the importance of parental education and awareness can’t be overestimated.”

On November 14, the CDC identified vitamin E acetate as a chemical of concern among people with e-cigarette, or vaping, product use associated lung injury (EVALI).

Recent CDC laboratory testing of bronchoalveolar lavage (BAL) fluid samples (fluid samples collected from the lungs) from 29 patients with EVALI submitted to CDC from ten states found vitamin E acetate in all of the samples. Vitamin E acetate might be used as an additive, most notably as a thickening agent in THC-containing e-cigarette or vaping products.

In addition, people should not add any substance to e-cigarette or vaping products that are not intended by the manufacturer, including products purchased through retail establishments. CDC will continue to update guidance, as appropriate, as new data become available from this outbreak investigation.

As of November 13, 2,172 cases of e-cigarette, or vaping, product use associated lung injury (EVALI) have been reported to CDC from 49 states (all except Alaska), the District of Columbia, and two US territories (Puerto Rico and US Virgin Islands).

Forty-two deaths have been confirmed in 24 states and the District of Columbia as of November 13, including one in Connecticut and three in neighboring Massachusetts.

For youth resources to also help quit vaping, the Connecticut Department of Health says any teen can text DITCHJUUL to 88-709. Adults who want to help a teen quit may text QUIT to 202-899-7550.