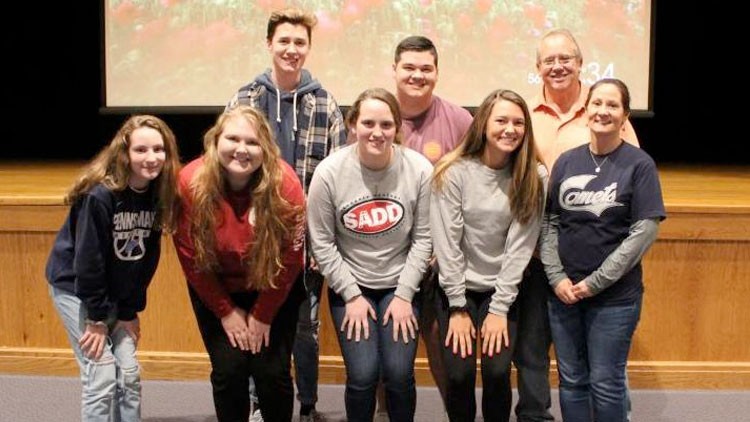 Penns Manor Area School District hosted Michael DeLeon, founder of Steered Straight and former drug offender, for a presentation against the use of drugs at the conclusion of Red Ribbon Week on Oct. 25.

During the 90-minute presentation, DeLeon spoke about the ways in which using drugs impacted his life and the lives of others around him. He also discussed the work he has done since serving time in prison to prevent adolescents from making the same mistakes that he made.

DeLeon’s first experiences with using drugs occurred at the age of 12, when a friend in middle school exposed him to alcohol and cigarettes. One year later, he began using marijuana.

According to DeLeon, the drugs were used as a coping mechanism for being a victim of abuse.

“I was depressed and traumatized by sexual and physical abuse in middle and high school,” DeLeon said. “I used drugs and alcohol to self-medicate, which didn’t work, and led to a long-term addiction.”

Despite the childhood difficulties he endured, DeLeon was able to launch a business with a group of partners in his early adult years that blossomed into a $42 million corporation. At the same time, however, DeLeon was still using drugs.

As a result, his business partners eventually terminated the partnership they had with him.

DeLeon’s drug addiction led to him becoming a member of a gang in New Jersey. While he became more involved in criminal activity, a failed drug deal he was responsible for led to the death of his own mother on Mother’s Day in 1995.

As DeLeon described in an interview three months ago, “People got shot, drugs and money went missing, and I was being held responsible,” he said. “I was off on a three-day drug binge, and they came looking for me. I wasn’t home, but my mother was, and they strangled and killed her.”

Even though he had no role in the murder of his mother, DeLeon pleaded guilty to aggravated manslaughter and took a five-year plea bargain in order to avoid the risk of receiving a heftier sentence in a trial.

Following his release from prison, DeLeon resumed his drug activity and was arrested again for violating his probation in 2002. He would never return to using drugs after serving his second sentence.

“I couldn’t accept (using drugs) for my life, so I began to seriously look deep within for change in how I think and how I lived, and I committed to a lifelong pledge to remain drug free.”

While in prison, DeLeon decided he needed to make a difference against the current drug crisis.

He established a program called Project PRIDE, standing for Personal Responsibility In Drug Education. The program would have two prisoners leave during the day with corrections officers to speak at schools regarding the consequences of drug use.

In 2007, DeLeon also founded Steered Straight, a nonprofit organization that focuses on speaking with adolescents to prevent drug use.

Since it was created, Steered Straight has become the highest-booked school presentation program in the United States.

DeLeon has directed and produced four documentaries that relate to the impacts of using drugs. His most impactful movie was called “Kids Are Dying,” where he interviewed 137 addicts.

Since the documentary’s release, the majority of the people featured have died from addiction.

“That film taught me, more than anything else I’ve ever done, that most addicts begin between the ages of 10 and 18,” he said. “It crafted my message and my mission for Steered Straight.”

DeLeon has testified before the Obama and Trump administrations to address the issues within the prison system, specifically relating to the five years he served for his mother’s death. He claimed, “The criminal justice system is set up in a way that pleading guilty for something I didn’t do became a better option than trying to prove my innocence by risking the rest of my life in prison. I want to change the system and it was an honor to have a chance to do just that.”

According to DeLeon, the biggest myth young adults tend to believe is that using alcohol and drugs cannot affect their lives.

He believes these myths are the “foundation of addiction in America,” and with the drastic rise of vaping and marijuana use, DeLeon predicts deaths associated with addiction will reach unprecedented levels.

However, the most important steps to prevent the spread of drugs in communities lie within the age group that is most susceptible to them. “You can’t help a problem you’re part of,” he said.

DeLeon also encourages students to join the SADD (Students Against Destructive Decisions) Club at their school, but for the average person, he says there are other ways in which they can help.

“There are plenty of coalitions and organizations that fight drug addiction and everyone should be involved,” he said. “Volunteering in an area of social agencies that are helping is a great place to start.”

“Stay in Your Lane” is the lifelong motto for Michael DeLeon. He began to practice and promote this phrase during his second sentence in prison, as it emphasizes the fundamentals that can lead to a successful and drug-free lifestyle.

“It means being who you are — honest, ethical and dedicated to your purpose,” he said. “Stay on the right path to get you to the destination you envision yourself reaching. Don’t get out of focus or off-course.”