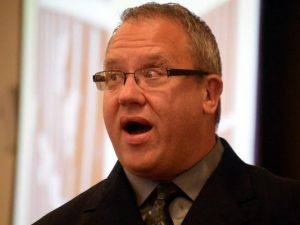 Of that total, 340 patients were admitted in Vineland, 29 in Bridgeton and 92 in Elmer.

Those numbers, along with concerns of people experimenting at younger ages, were among the issues discussed by local law enforcement and social service agencies Wednesday at a prescription drug and heroin conference at Cumberland County College.

Locally, authorities have noticed that more are turning toward heroin due to a price drop.

Millville Police Department Detective Lt. Jody Farabella said the cost of heroin was around $20 a bag when he joined the department 14 years ago. Now, a bag costs $5.

“Heroin and prescription drugs are really two different animals,” Farabella said. “Most kids start off with pills. They’ll take them because they can swallow them. As time goes on pills cost more money on the street. They want to get the pills — and sometimes they can’t — and that’s where they turn to heroin as the alternative.”

“I don’t think anyone wakes up and says they want to be a heroin addict,” said Webb-McRae. “They don’t understand the choice of taking that one pill, and where that could lead to. It’s opened up my mind in that we can’t just approach this as a criminal justice department. We have to deal with the addiction, the recovery and the education part of it. Otherwise we won’t really address the problem.”

During the event, a documentary on heroin addiction called “Kids are Dying” was shown by the nonprofit Steered Straight founder and president Michael DeLeon.

DeLeon also talked about his own past as a drug addict and a drug dealer. In 1995, his mother was murdered due to his involvement in a gang, and not long after that his wife and daughter were threatened at gunpoint due to a botched drug deal.

“That first line of cocaine ended my life,” DeLeon said. “Prison and God allowed me to get that life back.”

Webb-McRae said the Prosecutor’s Office is considering equipping police across the county with Narcan, a medication to treat people suffering from a drug overdose.

The generic name of the drug is Naloxone, and is administered as a nasal spray. It reverses the effects of heroin and other drugs in the event of an overdose. Law enforcement in Ocean and Monmouth counties are currently carrying Narcan as part of a program administered by Gov. Chris Christie.

“That’s coming,” Webb-McRae said. “We’re working on that. It’s something we’re exploring that the public will hear about soon.”