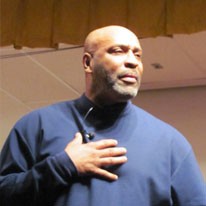 Rev. Ray Sydnor is an ordained minister who specializes in both a youth ministry and a sports ministry. The numerous summer camps and after school programs that he has led, bear witness to this fact. Rev. Sydnor credits his success to his life-transforming decision to follow God. He is a loving father who lives by example, influences others to play an active role in encouraging, empowering, and impacting the lives of those in their community.Ray has been involved in sports for more than 30 years. He played on the Philadelphia Eagles team who played in the 1980 Super Bowl and was an all-star basketball player. Ray’s extensive background in athletic excellence can be attributed to his success in football and basketball at Northwestern High School in Baltimore. It was his athletic talents there that earned him scholarships to the University of Wisconsin-Madison where he continued to excel in basketball and football. This is what subsequently led to his NFL post with the Philadelphia Eagles.It was truly a blessing for Ray to have served as the national spokesman for the Fellowship of Christian Athletes (FCA). Helping to steer our youth, across this country, in the right direction is how and where he invests most of his energy, time, and talents. God has allowed Ray to utilize his gifts, experience, knowledge, and passion to make a difference in the lives of all people.

Ray has served as youth Pastor at Mount Pleasant Church and Ministries in Baltimore. Under Under his leadership God blessed the team of youth leaders, allowing their ministry to grow physically, as well as spiritually. It was the success of that ministry that led to Ray being offered the position of youth pastor at Brooklyn Tabernacle in Brooklyn New York, where he lead a thriving youth ministry.