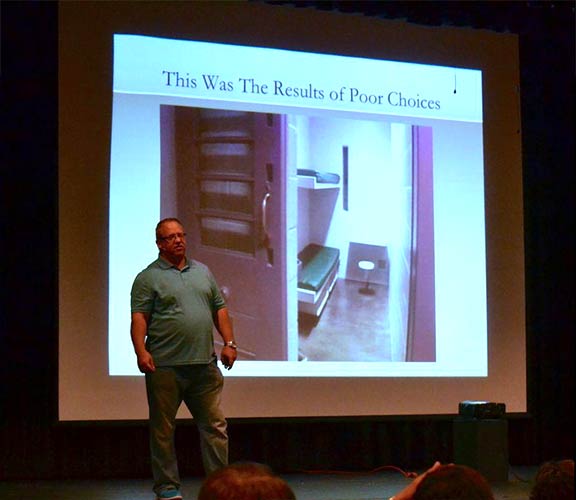 A recovered heroin addict shared his story with Wallenpaupack Area High School students a few weeks ago. Michael DeLeon travels the country, telling how caffeine pills led to cocaine and eventually heroin; but his connection to a gang led to his mother’s murder and a gun being held to his young daughter’s head. Today, with those incidents behind him, he told a gymnasium full of high school students and teachers that drugs will not go away, just because they’re not discussed. When he asked how many people have been affected by drugs or alcohol and many hands were raised, DeLeon told the students to see that they are not alone as they face this epidemic.

As part of a documentary he made, “Kids are Dying” DeLeon interviewed 137 “kids” in Camden New Jersey and Philadelphia who were “hooked on heroin” he said. A connection each “kid” shared was that, while many came from different backgrounds, everyone of them smoked marijuana, cigarettes, vaped or used e-cigarettes and drank alcohol when underage, starting at the ages of 12 to 15.

Marijuana, DeLeon said is a “genetically modified drug” that is not the same as it was in the 1980’s. Communication is important and he suggested the students tell their parents and caregivers how much they meant to them. The choices the students make today are significant, because they affect others and their lives later on. There are bad influences in life he said, and so it is necessary that they realize their actions may lead to “negative choices” and they must think about their choices and decisions.

DeLeon’s life changed when he started taking caffeine pills because he “loved to work” and hated to sleep he said. One caffeine pill was the equivalent to three cups of coffee. Those pills, were actually the drug speed, which he was unaware of. He was taking 60 to 70 pills a day, thinking they were caffeine. Soon, he encountered medical problems that included blurry vision, ringing in the ears, migraines and seizures.

Although he was aware that drugs “can be harmful,” DeLeon tried cocaine to replace the caffeine pills because he thought bad things couldn’t happen to him, he told the students. Soon, DeLeon was hooked and life “spiraled out of control.” With a very lucrative job in marketing, DeLeon faced an intervention from the president of the company he worked for, business partners, his father and wife. That was the first time DeLeon had seen his father cry, which he was surprised to see. Rather than getting help, DeLeon sold his portion of the business for $178,000 which he spent in 90 days on drugs. At one point, when his four-year-old daughter was crying for food, DeLeon wondered if he had a drug problem. But then, he decided to travel to Newark where he had heard there were more drugs. He returned three days later, after spending the family’s rent and security deposit.

DeLeon went on to commit his first shoplifting offense and do what was necessary to “get my drugs” he explained to the WAHS students who sat in silence throughout the presentation. He broke into homes, eventually finding a gun that he used to rob gas stations. Eventually DeLeon joined a gang in Newark and when his wife left, DeLeon said rather than chasing after her he used more to “medicate my pain.” After his landlord kicked him out, DeLeon went to live with his 63-year-old mother who was a retired nurse. It was then, that he accepted the fact that he was a drug addict. But, he didn’t stop as he put a drug deal together that “went horribly wrong” he said, because people were shot and drugs and money went missing. The gang went looking for DeLeon, but since he was hiding they found his mother who they strangled. When he discovered his mother on Mother’s Day in 1995, she had been dead for hours, but he didn’t realize that and instead, he tried to perform CPR because of his “drug delusion.”

Although he didn’t kill his mother, DeLeon was charged with first degree murder because there were no other suspects and his story was on the front page of the New York Times. He spent 22 months in a county jail. After taking multiple polygraph tests, even DeLeon’s lawyer didn’t believe he was innocent. He ended up taking a plea agreement for first degree aggravated manslaughter in exchange for a prison sentence of 20 years; but he served five years.

After prison, once DeLeon’s life was going well there was a car accident that led to his neck being crushed and the need for pain medications. In a matter of a week, DeLeon ate an entire bottle of OxyContin and was “drooling like the walking dead” he told the students. Once again, DeLeon’s life was out of control because he was hooked on opiates, leading him to see 67 doctors in six New Jersey counties and getting over 7,000 pain pills a month. Eventually he sold them and went back to jail, and reconnected with the gang that was responsible for his mother’s murder and started using cocaine and heroin again. Once again, DeLeon opened his home to the gang and when money went missing, a 9-mm gun was held to the side of his daughter’s head and his wife’s face was smashed on the kitchen counter. When the person who had the money was found, he was shot in front of DeLeon. That scared him so much, DeLeon wet his pants.

Recalling his mindset, DeLeon said when he first tried cocaine he never imagined his life going in such a direction and becoming someone he wasn’t. But, he told the WAHS students that he never stopped to think how his actions were affecting others and now, he has to live with his mother’s murder and the experiences his family has had because “I said yes to drugs and I said no to my life.”

If he wanted to work in the district, DeLeon said the board of education wouldn’t hire him to mow the lawn and in total, there are 800 careers in the United States he is ineligible for. After prison he earned his bachelor’s degree, but was denied to three universities when hoping to earn his master’s degree. But, Liberty University did accept him and now, DeLeon is working on his master’s for counseling. He has since been pulled over by police and the information the officers see, DeLeon said is “who I was, not who I am.”

If a person is not subscribed medications, simply DeLeon said they shouldn’t take it. And while some don’t believe pills will lead to the needle, “most of the time it does” and that drugs will not “do anything positive for you.” Friends simply, “don’t let friends do drugs” and they aren’t friends if “they’re offering you drugs.”

Because a person does not know if they will have a genetic disposition to addiction or how their brain will react, the right choices must be made and so, DeLeon asked the students to make the right choices and decisions because they will “lead you to positive consequences.”

Following DeLeon’s presentation, sophomore Marybeth Vazquez said he made her realize that addiction can happen to anyone. The issue is “kind of scary” because she tries “my hardest to stay away from drugs” but if she had wanted them the day of the presentation, Vazquez said it wouldn’t have been an issue because they are “right down the street.”

Also a sophomore, Donald O’Brien said he has multiple family members who struggle with addiction to “avoid the pain of life.” The presentation “exposed the fact of life” and was “kind of raw” because not everyone understands the issue as they “sit behind shallow illusions” and don’t acknowledge that addiction exists. Hearing DeLeon, O’Brien said he felt a connection to him, because of his story and following the presentation, he told him that.

After the presentation, DeLeon said he would like to have Narcan placed in every middle and high school in the country. The idea of putting a heroin antidote in schools though is “horrible.” DeLeon travels, sharing his story today he said, because he believes it is what god wants him to do. DeLeon has learned through surveys that 80 percent of the students he speaks to tell their parents of the assemblies and that, he is proud of because it “started a conversation.”

While DeLeon has been clean for 14 years, he expects the epidemic will get worse in the next three years, to the point he doesn’t believe there will be a reduction in opiate deaths until 2020. It is marijuana though, that DeLeon called the “Trojan horse that will implode” the country because it is a “genetically modified commercialized industrialized toxic poison.” Wanting kids not to drink or do drugs is something he is working for, simply because “I don’t want my past to become their future.”

The story, DeLeon acknowledges is “pretty horrendous” but when he has students like one from WAHS tell him after programs that he will not try marijuana or other drugs because of his story, that is what his efforts are about. Those instances are the reason DeLeon feels, “my life has got purpose.”

For more information about DeLeon, visit his website at www.steeredstraight.org or he can be reached at (856) 691-6676.