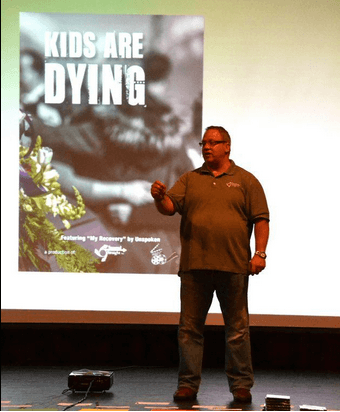 In a region many travel to escape the hustle and bustle of city life, an issue is underway that has caused great heartache and concern, while leaving some to wonder what can be done to address the area’s struggle with addiction. To learn more, at Wallenpaupack Area High School last week, Michael DeLeon the president of Steered Straight Inc. told his tale of addiction and recovery to a crowd of 300 who want to understand what is happening in their backyard.

Not a simple issue, DeLeon said parents must talk with their children, when they are in the middle school and it is time to change the conversation because alcohol and pill experimentation begins in the sixth grade.

As of two weeks ago, DeLeon attended his 121st funeral of acquaintances who perished from addiction. Kids, DeLeon said need to realize that their friends will not introduce them to drugs and the conversation is needed now for children, since drug and alcohol abuse starts so early. The reality is that drugs are in Pike and Wayne Counties, and for those who deny the facts, DeLeon said that is a problem.

As people continue to die from addiction, DeLeon said it is discouraging because he is “fighting a battle bigger than myself.” DeLeon travels the country telling his story and at the WAHS program, it was one of the best turnouts he had ever seen.

The basis for Nancy Reagan’s campaign to “just so no” didn’t fail, but it wasn’t large enough DeLeon said, because children needed to be taught what to say no to. Had he said “no,” DeLeon noted that he would not be speaking on the issue of addiction.

In a span of 10 days three years ago, DeLeon who is a clinical alcohol and drug counselor lost four “kids” to heroin overdoses, three died in a week and the fourth was three days later. One, who was 19-years-old on a full academic scholarship, became addicted to Percocet from a sports injury. His 11-year-old sister found him. DeLeon said the young man smoked marijuana and drank while in high school.

Another woman passed a drug test a week before she was found by her mother, with a needle in her arm. While the woman struggled with addiction, DeLeon told her mother to kick her out. Kicking a child out, DeLeon acknowledges is hard, but it is “tough love” that doesn’t come with a manual.

Tobacco & booze may be 1st step

To show the significance of this epidemic, DeLeon traveled to Camden, New Jersey, which he said has the “purist” heroin in the country. While there, he filmed 137 kids, not one who was from Camden. Of those filmed, 121 used prescription narcotics, all 137 smoked tobacco and alcohol and drank when under age.

With so many people working to fight addiction, DeLeon said their efforts are working, but kids must realize the dangers of cigarettes, alcohol and marijuana. He said 90 percent of those who become addicted, started when they were a teenager and so stopping kids from smoking cigarettes and waiting till they are of age to drink, may help the epidemic. While the United States will never be drug free, numbers can decline so the current “pandemic” ends.

What used to be “pharm parties” where medications are put in a bowl and passed around with alcohol, are now called “skittle parties.” Because of this, DeLeon said it is important that medications be removed from medicine cabinets. Seniors too, are fighting the battle because they are prescribed too many pills.

Over the past two years, DeLeon has traveled the country making a video about marijuana and he has acquired medical marijuana cards in Colorado and California for the extreme pain he has for his menstrual cramps.

In Colorado, DeLeon was allowed to buy one quarter ounce a day, but in total he went to 26 dispensaries and bought 80 quarter ounces of marijuana in six hours. Of the purchases, only one was legal, but he bought everything with cash and spent $2,500 on marijuana edibles. The marijuana he purchased, DeLeon thought had a 5 percent THC, but at a Denver crime lab, he learned it was four times more potent than that. Of the 80 strands he purchased, 72 had mold and 61 strands contained pesticides that are outlawed by the department of agriculture. He called marijuana today, “poison.”

DeLeon said he would like to drug test every 8th and 9th grader in the country and so, he told those at WAHS who sat in near silence throughout much of the presentation that, he wants them to drug test their own children. Even if they were to never use a drug kit, DeLeon suggests buying one and having it as a “conversation piece.”

DeLeon’s own addiction started when a friend introduced him to drugs. He said his addiction became a “life consuming problem.” When he sold the shares of a multimillion dollar business, he spent the $178,000 in 90 days. Eventually, he started shoplifting and holding up gas stations to feed his habit. As his addiction progressed, DeLeon taught himself how to shoot heroin in one arm and cocaine in the other.

When his wife Darla left, DeLeon moved in with his mother and on Mother’s Day in 1995, she was strangled because members of a gang he was involved in, were looking for money and drugs that had gone missing. When he found her, DeLeon tried CPR, but she had died hours earlier, but since he was high he didn’t realize that. DeLeon has pictures of himself getting high at his mother’s gravesite.

Although he didn’t murder his mother directly, he did make a plea agreement and serve some time. Once back with his wife and his life was getting in order, DeLeon was in a car accident that led to his relapse and reliance on pain medications. At one point, he ate 365 milligrams of Oxycontin in a week and when he wanted more, doctors gave it to him. He was also prescribed other medications, just in case the Oxycontin didn’t work. Since his drugs of choice were cocaine and heroin, DeLeon started selling the pills and to get more pills, he saw 57 doctors in six New Jersey counties, all to support his cocaine and heroin addiction.

Since he couldn’t get the drugs fast enough, DeLeon rejoined the gang that was responsible for the murder of his mother, and opened his home to distribute cocaine and heroin. When some members were looking for $1,200 and he wasn’t home, a gun was held to his 11-year-old daughter’s head and another was stuck in his wife’s mouth. Today, his daughter remembers that day clearly.

This August, DeLeon will be married to his wife for 28 years and of those years, he spent 14 serving time and addicted to drugs. Looking at his past, DeLeon said it is something he never would have imagined for himself, but he knows his choices affected his family and he lost his freedom because of it.

Addiction and drugs can be addressed DeLeon said, since people can get involved in organizations like the Wayne County Heroin Prevention Task Force and conversations can be had early on, to educate kids of the dangers of drugs.

Since the program last week, Assistant Superintendent Dr. Joann Hudak who has worked for years to inform the community about drugs and was deeply moved by the turnout, said she has received positive feedback about DeLeon’s presentation. Some people did say however, that they were “deeply disturbed” by the “depth of the epidemic.”

There are plans for DeLeon to return to the district in the fall to speak with middle and high school students and possibly another community program. Hudak plans on reaching out to Western Wayne and Wayne Highlands to introduce DeLeon to those districts.

The pandemic, DeLeon said is only going to get worse and so, people must understand what lies ahead. He is open to talk with anyone who seeks his assistance. Traveling the country to tell his story, DeLeon said he does it because “I don’t want my past to be their future.”