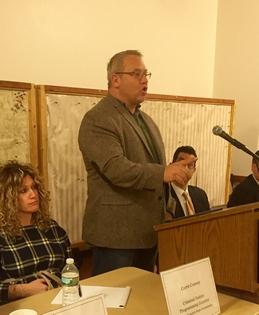 The meeting highlighted the crisis and challenges for those struggling to recover from substance abuse and was hosted by Michael DeLeon, a documentary filmmaker and the founder of Steered Straight, an organization that travels the country speaking about substance-abuse related topics.

DeLeon, a former drug abuser, served time in prison after pleading guilty to killing his mother in a drug-induced rage in 1995. He said he has been out of prison for nine years.

“I was part of the problem,” DeLeon said. “I was a drug addict, dealer, user. I want to be part of the solution.”

DeLeon said there’s a lack of resources for drug addicts to get help on demand.

“We need to educate our children about the dangers of it, and give them coping skills and escape mechanisms,” DeLeon said. “But really give on-demand treatment and detox when it’s necessary.”

Members of the audience were free to speak. One who did so was Matthew Bitterman, 22, of Dover, a former addict who said he was celebrating three months of sobriety on Thursday.

“I know from my experience, it’s that stigma,” Bitterman said. “Being afraid of other people’s opinions. When I made that first step, I said to my dad, ‘Hey, I got a problem.’ After that, it was a relief that I was able to get that help.

“That’s a major problem, the willingness of people to bring that up,” he continued. “To say, ‘I have a problem.'”

DeLeon also said he would like to see an end to direct-to-consumer marketing of pharmaceuticals. But most importantly, he said he’d like to see the stigma of addiction no longer applied to those who need help, which would raise awareness of the disease of drug addiction and foster more compassion from the public.

“It’s not a moral issue,” DeLeon said. “It’s not bad people doing bad things. These are sick people trying to get better.”