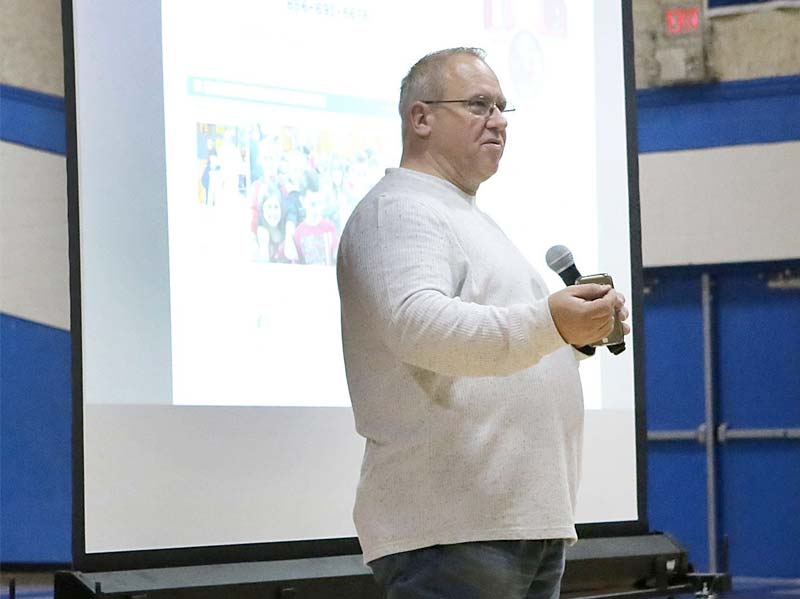 Michael DeLeon, the founder and CEO of the Steered Straight educational nonprofit organization, told Teton County students, administrators, teachers, school staff and parents he is on a mission to educate the American public, adults and kids alike, about the effects of drugs and vaping on young minds.

During the four, two-hour presentations held in Choteau and Fairfield on Jan. 7, DeLeon pleaded with middle and high school students from those two schools plus Dutton/Brady, Power and Greenfield to say no to vaping and drugs and to be “the best version of you that you can be.”

The speaker also spent close to two hours educating staff from area schools. That presentation was held at Fairfield and was streamed to the other schools in the county. He held an evening presentation for parents and community members in Fairfield that was attended by approximately 30 people.

DeLeon’s message, both personal and gripping, kept the students engaged, and they were just as immersed in the question and answer section at the end.

Fairfield High School Superintendent Les Meyer said with the statistics being released almost daily on vape use, the school district began researching options for bringing a speaker to the school district. Meyer said the Steered Straight program came highly recommended. “DeLeon is a renowned speaker who is very engaging with the students,” Meyer said. While a lot of his presentation was about vaping, DeLeon also touched on opioid abuse, marijuana and alcohol use.

Meyer said it worked to involve all of the school districts in hearing the presentation. He thanked Sun River Electric Cooperative for sponsoring the speaker through its grant program.

Who better to talk to students than himself, an ex-offender, asked DeLeon. “I learned it all and I have lived it all,” he said. DeLeon spent 12 years in prison. He was first sent to prison for a gang-related homicide that resulted in his own mother dying. He was released after five years but began using once again and returned to incarceration for another seven years.

He shared details of how he turned to smoking at the encouragement of a friend who said it would relieve tension caused by his parents’ divorce. The smoking quickly turned to drinking and drugs, all starting in the fifth grade. He went from a happy-go-lucky good student to an angry, failing student. He shared the vivid memory of a school counselor taking him aside, asking what was going on in his life. DeLeon didn’t respond to the help being offered — something he knows now could have changed the course of his life. “I’m good,” he would say as he pushed everyone away.

He emphasized his destiny wasn’t to become a drug addict and go to prison; he was an exceptional athlete who was undefeated as a wrestler his junior and senior year. He was on a path to attend college and wrestle, and maybe even end up in the Olympics.

The audience quickly learned his wife, “the red head,” is his world. He shared details and pictures on a video presentation of her and his two children and beamed when he spoke of his grandchildren. With the images of his family on display, he painted a vivid picture of his wife visiting him weekly in prison for 12 years. The guilt associated with his life choices and the anguish he has caused his family was etched on his face when he shared those stories.

Since being released from prison, DeLeon has earned several degrees and has turned his life mission into helping others, especially students.

He founded Steered Straight Inc. in 2007 and travels extensively throughout the country. In fact, he was only at his home in Nashville 17 days during 2019. He has written, directed and produced documentaries and is a published author.

The Steered Straight program reaches out to children, teens and young adults with a message of reality about life choices and the importance of understanding there are consequences to their actions.

“You are the smartest generation, but you are being lied to,” DeLeon said when talking about vaping products. DeLeon said vaping was marketed to help people quit smoking, but the drawback is the main drug, nicotine, is still present in vapes, or e-cigarettes.

One Juul pod is the equivalent of four packs of cigarettes, according to DeLeon.

Vaping is also a cause of respiratory disease, and the addition of marijuana vapes, or pods, being made available in flavors aimed at kids is adding to the national crisis.

Throughout the presentations, DeLeon interacted with the students, asking for a show of hands to a variety of questions of who has tried things such as vaping or drinking.

He shared that in a recent survey, 37% of kids said they didn’t even know that it was nicotine they were inhaling when they were vaping this trendy little device — the JUUL.

“Today, 25% of teens surveyed don’t even call what they’re doing vaping,” DeLeon said. “They call it ‘JUULing’ and they literally don’t consider it the same thing, and most don’t consider it dangerous. Many teens and young adults don’t even know they are inhaling an addictive substance — nicotine. These products didn’t even have labeling informing the user that they contain nicotine until regulations were created and enforced.”

Another danger DeLeon sees is the ease with which kids can get liquid THC, which many people mistakenly refer to as liquid marijuana, DeLeon said. He spoke of the countless websites and kits to turn any and every e-liquid into a THC liquid, and estimated as much as 40% of all e-liquid devices confiscated by middle and high schools test positive for THC.

He praised Montana for taking vaping seriously and applauded the federal decision to change the age limit to purchase a device from 18 to 21.

After presenting the facts, he told the students to not even to try it once. He encouraged them to seek help if they are already hooked or if life throws challenges in their path. He spoke of the great support systems available, especially in the small rural communities where teachers and community members are there to help if you can’t go to your parents.

In talking to teachers and staff, DeLeon said the three most dangerous words a parent can say about teen drug abuse is, “not my kid.” He presented the schools with materials to help educate staff and ways to address problems when they do arise.

DeLeon advocates for open communication between parents and their kids. He said the three major gateway drugs to abuse are alcohol, marijuana and nicotine.

He likes the idea of sitting down to dinner as a family at least five times a week and believes this opens up communication. He is also realistic and knows this is hard in this day and age, so instead he urges families to have five conversations a week. He calls this form of communication “Table Talks.” He has written a book with 364 conversation starters which are available on his website, www.steeredstraight.org.

He also believes that to curtail drug experimentation in middle and high schools, students in sixth, seventh and eighth grade should be tested for drug use. He believes parents should test their kids and has resources available online to test surface areas in the child’s room for THC, the main component of marijuana.

“Drug testing is one of the biggest tools a parent can have,” DeLeon said. “It works two ways; it keeps the child from trying drugs if they know a parent is going to randomly drug test and also gives a student an out from peer pressure to say they can’t do anything because their parents drug test.”

DeLeon has been drug and alcohol free for 17 years. During the question and answer section, one student asked if he ever wondered what his life would have been like if he hadn’t gone to prison. He responded by saying his past has made him the person he is today. He recalled being pressed about this subject at another presentation and a girl not liking his answer. She instead asked how could he know what he would have been. With that said, he said for him, finding religion in prison has made his life much clearer. He doesn’t force his beliefs on anyone, but instead asks students to find a purpose.

“My purpose is talking to you and showing you the path not to take from my experience and giving you facts and data to support it,” DeLeon said.

He closed the Fairfield presentation by talking about the wide-open sky of Montana, saying he couldn’t imagine a better place to live.