Speaker Steers Students Away From Drugs 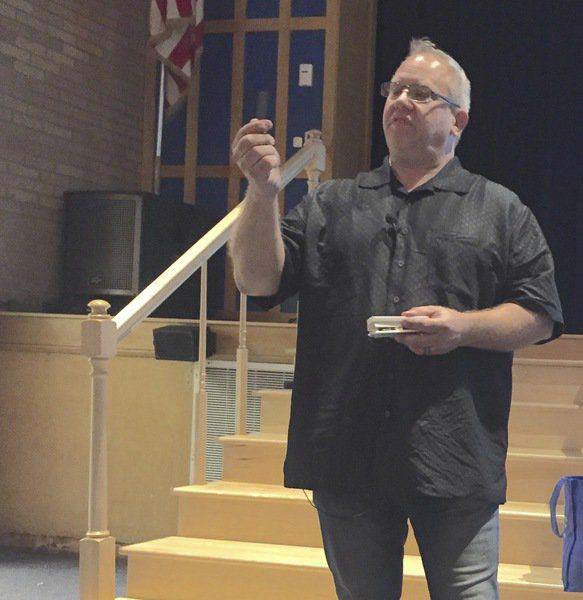 The founder and CEO of Steered Straight, an educational nonprofit, asked the Wilmington Area High School students attending his “Stay in Your Lane” presentation yesterday to put down their vapes.

For seven days, he wanted the teens to quit.

“This is the next pandemic,” he continued. “Kids think it’s safe but it’s designed to hook the next generation of smokers.

“I’m here because I care and you’re worth it. You’re the generation that’s being lied to,” DeLeon said, displaying the vape pipe a sixth-grader turned over to him after one of his presentations telling him he was scared. “Most people believe that these were invented to help people quit smoking, but it’s nothing more than a drug delivery system, whether for nicotine, marijuana or maybe one day heroin without needles.

“No one knows the long-term effects of vaping, and what toxic chemicals are being put into your bodies along with the drugs,” he continued. “Even if there is testing, it’s not on those under 21. We’re not even sure how to treat nicotine addiction in those under 18.”

While DeLeon, who also talked with students at the Lawrence County Career and Technical Center, focused his presentation on vaping, he addressed other addictions.

Starting his program telling the students, “I’m not just another adult here to beat you in the head about drugs and alcohol,” DeLeon proved just that.

DeLeon related how he, a straight-A student who lived for getting good behavior stickers in fifth grade, ended up a drug addict and gang member who spent 12 years in prison.

A two-time cancer survivor who also flatlined three times after an auto accident caused by a drug-induced seizure, DeLeon shared with his audience how his parents’ divorce and sexual abuse at the hands of a priest who was supposed to be counseling him started him on his downward spiral.

“I smoked cigarettes, drank and used weed, those three little drugs that no one thinks are drugs. Don’t let anyone tell you those aren’t gateway drugs,” said DeLeon who calls nicotine, alcohol and marijuana the “trifecta gateway.”

DeLeon’s drug use led him to involvement with gangs, which, he said, ultimately led to his mother’s murder. She was strangled on Mother’s Day 1995 when gang members came to her home looking for him.

“I caused the death of my 63-year-old mom on Mother’s Day morning. That’s something I have to live with,” he said.

“I wish I could change things, but it shows you how your choices affect your health, your future and your family,” DeLeon said, encouraging students who have drug and alcohol problems to find a trusted adult and,”Talk about it. All of it.”

Telling of friends and acquaintances who were honor students and star athletes before succumbing to addiction, DeLeon said, “The face of addiction has changed. It’s not just the junkie under the bridge, it’s also the straight-A soccer star.”

Noting that some people become addicted to opioids, and later heroin, via prescription medication, DeLeon said, “They hand out opioids like Skittles.”

Throughout the program, DeLeon, who also produces documentaries and has written books about the drug epidemic, mixed in facts and figures to drive home his points.

“His message is so important,” said the Rev. Randy Crum, founder and president of Vision Ministries, which brought DeLeon to Lawrence County with the help of funding from the Hoyt Foundation.

Crum also noted that with yesterday’s presentations, DeLeon had visited all nine Lawrence County high schools at some point since 2016. Last year alone, he visited 616 schools in 40 states.

Often, as he did at Wilmington, DeLeon stays after to talk to students about individual situations.

“Your generation is under siege,” DeLeon told the teens. “You’ve become a target for the addiction industry.

“That’s why I’m working hard to make a difference and bring the truth. You mean as much to me as my own kids and grandkids. The choices you make now will affect the rest of your life. You’re the only hope this country has. If you just stay in your lane, you’ll get to where you’re going.”