Nassau Street in Princeton is not Perry Street in Trenton, but they have much in common.

There are drug addicts walking those streets, and it’s getting worse.

That’s the point that Michael DeLeon — a former gang member and drug addict — sought to make before more than 100 people at a special forum on heroin and opiate use Wednesday night at Princeton High School.

Mr. DeLeon spent 12 years in prison and two more years in a halfway house before turning his life around and earning five college degrees. He is a counselor and motivational speaker who seeks to keep children from walking down the path to drug addiction.

“I was fascinated with drugs and crime,” Mr. DeLeon admitted. “I was part of the problem. (When I got out) I said I would be part of the solution.”

Mr. DeLeon places much of the blame on the pharmaceutical companies that advertise their products — drugs — on television. Got a little problem? Something hurts? There’s a pill for that.

“We are a pill society,” Mr. DeLeon said.

But it’s not just pills that lead youngsters into drug abuse. It’s tobacco, 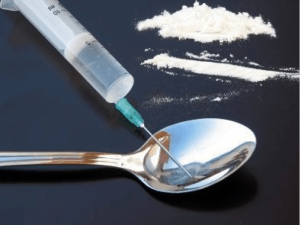 caffeine and alcohol, which are drugs. Add marijuana, and it can be a downhill slide into drug addiction. Marijuana and alcohol are known as “gateway drugs,” which can lead to heroin and opiate addiction, Mr. DeLeon said.

That’s one of the reasons why Mr. DeLeon is firmly against legalizing marijuana. The THC content of marijuana grown today is significantly higher than it was 20 or 30 years ago. Marijuana can be ingested in a food form, not just smoked. In his opinion, there is very little difference between medical marijuana and recreational marijuana.

Heroin also is more potent than ever, Mr. DeLeon said. It is also cheap, and that’s why its use — and addiction — has spread. The South American drug cartels “will stop at nothing” to encourage the use of heroin, he said. Urban street gangs have been moving into the suburbs, promoting drug use. Ocean County has experienced an epidemic of heroin deaths among young people, he said.

Families play a role, too, he said. It is the lack of interaction between parents and their children, and between the siblings themselves. He recalled sitting at a restaurant, watching as family members became absorbed in their smart phones. It appeared to him that two of the children were sending text messages to each other, rather than talking.

Parents also are quick to rent a motel room or a house at the Jersey shore for their children following the high school prom, he said. They figure that as long as their children are drinking, but not using heroin, everything is fine, he said. Allowing them to drink at home so they do not have to drive a car while drunk also sends the wrong message.

Families are key to stopping the spread of drug addiction, Mr. DeLeon said. At least one night a week at dinner, parents should talk to their children honestly about drugs and drug addiction. Parents also have to be more knowledgeable about drugs, including nicknames for the drugs.

“Society has to wake up. We need to get information to the children. We all need to speak together and work together,” Mr. DeLeon said.

The panelists agreed. Mr. Onofri, the acting Mercer County Prosecutor, said that about 80 percent of first-time drug offenders misused prescription drugs. They move onto abuse other drugs and find themselves addicted to heroin and opiates.

Heroin use and addiction has grown because at $3 per deck — the size of a sugar packet — it’s cheaper than oxycodone, which is $20 per pill, Mr. Onofri said. In Mercer County, heroin comes from suppliers in Perth Amboy, New York City, Newark, Camden and Philadelphia.

Legislation has been passed that encourages people to call for help if someone appears to have overdosed on a drug, Mr. Onofri said. No one will be prosecuted if they call for help. Immunity has been extended to anyone who has been involved, and many lives have been saved, he said.

Lt. Maurer of the Princeton Police Department told the attendees that police officers saved two lives by administering Narcan, which reverses heroin’s effects. “We are just one part of a big puzzle. You can’t bury your head in the sand,” he said of the increasing use of heroin and other drugs.

Lt. Maurer said that while Princeton is a safe community, the amount of property crime (thefts) nationwide related to drug use is “staggering.” Drug addicts will steal “tip” jars from restaurants and businesses so they’ll have money to buy more drugs, he said.

Mr. Smith, the clinical director at Corner House, said treatment is available to help those who want to get rid of their drug habit. Narcan is not itself a treatment, he said. The issue is that people use drugs to self-medicate — to feel better — and will continue to use pills.

“If you like a pill, you’ll try to get more. If the doctor won’t prescribe it, you’ll buy it from someone you know,” Mr. Smith said. That often marks the beginning of the trail to heroin addiction, he said, adding that many people end up in an orange prison jumpsuit in front of a judge.

“Heroin (addiction) is not the problem. It’s the end of the problem,” Mr. DeLeon added.