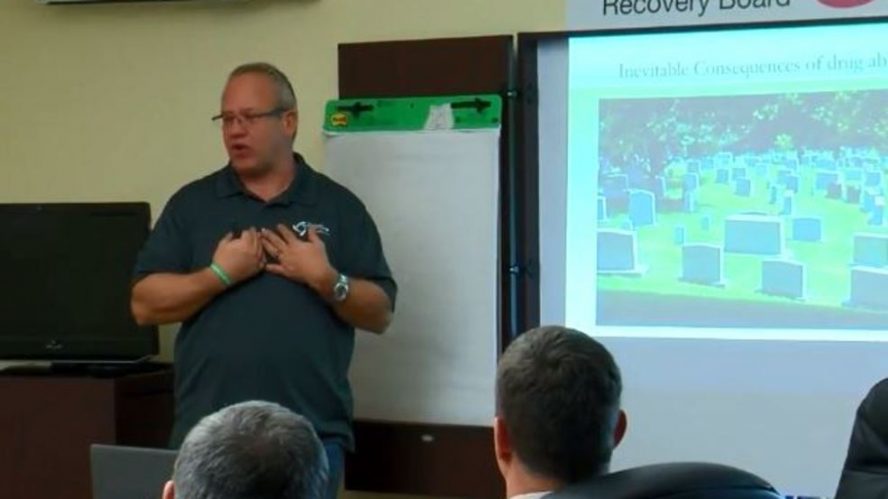 Ohio remains the epicenter of the opioid epidemic. In light of the drug issues in the area, the Family Recovery Center’s Education Department brought a nationally-renowned speaker to the city of Steubenville Tuesday.

It’s a part of the county’s four-day community outreach effort.

Michael Deleon used to believe in “it couldn’t happen to me,” but then it did happen to him: He is a recovering heroin addict who has spent more than 10 years in prison. His goal is to save as many people as he can from having this mindset.

“Rock bottom is where you stop digging, and I stopped digging the second time I went back into prison,” Deleon said.

He calls it “Can’t happen to me-ism,” and it was the mindset Deleon used to have. His organization, Steered Straight, is his way of preventing his past from becoming students’ futures.

Deleon spoke to community leaders Tuesday night, but his main goal is to reach students. He visited schools around Jefferson County during his time in the area.

“Michael reached out to 1,500 – 2,000 students in two days and the response was great,” said Family Recovery Center Prevention Coordinator Joe Rawson. “There were students lined up after to talk with Michael.”

People may argue that simply telling students ‘don’t do drugs’ won’t be effective, but Deleon has a different method.

“If someone looks at a speaker coming to a school and talking to kids about drugs, I agree, that is not effective without being engaging, and I do not tell a story, I teach a story,” Deleon said. “So, I wrap my story in an education lesson and then we have a module program that stays with the school.”

Already, Steered Straight has made a difference. Deleon said 80 percent of students go home and talk to their parents, and that statistic was no different during his time in Jefferson County. Students have already reached out to Deleon and the organization.

“What I want kids to get from my program is connection,” Deleon said. “I want them to see what happened in my story and if it is happening in their lives, I want them to make a different choice.”

The four day out reach will conclude Wednesday. Deleon will make a visit to Jefferson County’s Drug Court.