MILLVILLE – When hundreds of sixth-graders at a Lakeside Middle School assembly were asked Friday if they knew someone in jail, the majority of hands in the room went up. When asked seconds later if anyone knew someone who was a drug addict, most of those hands went up again.

It’s an issue that hits the heart of Michael DeLeon, president and founder of the nonprofit Steered Straight Inc., which offers motivational programs for children and adults to live the right way and stay away from crime. 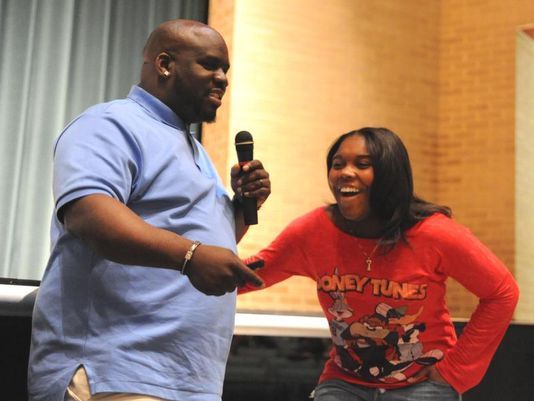 DeLeon, along with Steered Straight Vice President John Fuqua, spent the day speaking to each grade at the middle school, with the conversation getting more mature the higher the grade level. The sixth-grade assembly focused on bullying, while discussions with seventh and eighth grades revolved around drug and alcohol usage and other issues.

“They really loved it and got engaged,” DeLeon said of the students. “We’re making a difference, and kids can identify with us. What we’re just doing is accentuating the importance of the relationships between children and the amazing teachers. These kids have to internalize and personalize how important these role models are in their lives, because when all those hands went up, they’ve got to have issues going on at home.”

DeLeon, an ex-con, has dealt with his own issues in the past. He grew up in North Jersey, and served a prison term from 1995 through 2007 for drug charges, with two years spent at a halfway house in between.

“I could’ve went anywhere after I got out of prison,” DeLeon said. “But my wife relocated to Millville to settle down. This was where I could do the most good. According to the Robert Wood Johnson Foundation, we’re the unhealthiest county in New Jersey six years in a row. We have a huge number of children with incarcerated parents, a huge bullying rate and a huge drug problem between Vineland, Millville and Bridgeton.”

Steered Straight runs various programs for students and parents, including an 8-week program called “Ending the Cycle,” which reaches out to students with incarcerated parents in an effort to make sure the children don’t see prison in their lifetime.

“I think they were wonderful,” Lakeside Student Assistance Coordinator Tina Shannon Benishek said about Friday’s program. “In sixth grade you wonder, because they’re still quite young. But they were awesome to me. They were all engaged, and I was very proud of them.”

She added that this year the school has sent more students to be drug tested than any other year.

“It’s very scary,” Shannon Benishek said. “Our average age for alcohol on first use is 11, which is on par with the state average. It’s important that we don’t wait to get that message out. It has to start early.”