For an hour and forty minutes Thursday, North Montgomery High School students and faculty were so quiet one could hear a pin drop. On the auditorium stage were two men who gave testimonies so powerful it brought many audience members to tears. 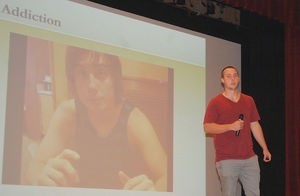 The men shared their struggles with drug addiction and their poor choices. Those decisions led to ruined lives and death.

The event, sponsored by MUFFY, was presented by Michael DeLeon, president of Steered Straight Inc., a non-profit organization that helps prevent youth and young adult drug abuse. Both DeLeon and co-worker Colin O’Brien shared their drug addiction journeys that at times rivaled a Hollywood suspense movie.

DeLeon’s crime-ridden journey began after he left the Navy Seal team and became a successful vice president of a fast-growing company in Florida. He even had his photo on the cover of Inc. Magazine. The pressure caused him to turn to energy pills, which eventually led to cocaine. Soon he lost his job and the downward spiral took over.

DeLeon said his bad choices hurt a lot of people, including his family. It even led to his mother’s death.

“I was living on the streets, and decided to go see my mother on Mother’s Day,” DeLeon said. “I walked into the house and found my mother lying at the end of her bed. She had been strangled and robbed eight hours before I got to the house. I have to live with that for the rest of my life knowing my lifestyle led to my own mother’s death.”

A couple of years later, DeLeon was selling heroine. One evening the drug dealers he was doing business with came to his house and demanded money they thought he owed them. He told them he had paid them. Not believing him, the drug dealers slammed his wife’s head on the kitchen table and held a pistol to her head. The men also took DeLeon’s five-year-old daughter, grabbed her by the hair, and stuck a pistol into her mouth. The men threatened to shoot both of his loved ones if he did not come clean with the money.

The men then forced DeLeon into a vehicle and sped off to another man’s house who admitted to using the heroine instead of selling it. The result — he was executed by one of the dealers.

Hours later police were at DeLeon’s door with a warrant for his arrest.

DeLeon agreed to a plea in the case. He was sentenced to 30 years in jail and served 12 years.

DeLeon, has since turned his life around and now encourages students to “stay in your lane.” He told students they have too much to lose to start down a pathway toward drug addiction.

O’Brien, who is 19, said he first started using drugs at the age of 12. He was a successful football and lacrosse player at his high school, and he had a full-ride scholarship to a division one university to play lacrosse. He lost it all due to drugs. He too found himself living on the streets before making a change two years ago.

“I am 19 years old and have lost 27 friends due to drugs that I will never get back,” O’Brien said. “Giving up is not the answer.”

“What we experienced today was well worth the time out of the classroom,” Moran said. “Mr. DeLeon and Mr. O’Brien did a wonderful job and held each student in their hands. This assembly exceeded my expectations.”

“Many think at this age that this will never happen to them, but I think they brought the message home that it is a slow and slippery slope when you smoke that first joint,” Cox said. “I want the kids to know we do random testing to help them. If we can catch them early, we can make a difference. We want to help our students not get them in trouble. This is a community problem and I thank MUFFY for bringing the whole community together to make a difference.”

Several high school students gathered around the two speakers at the conclusion of the event. At least three students asked for help.