Nearly 135 sixth- through eighth-graders listened intently and interacted with the pro athletes as they explained the paths they had traveled — including hardship and challenges. Poteat and LaManna encouraged students to identify their objectives, have faith in their ability to achieve, and refuse to let negative influences distract them. 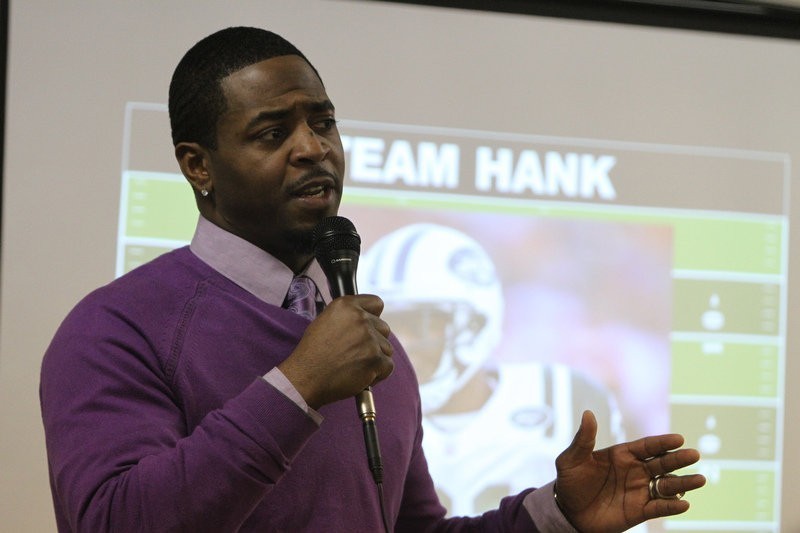 “When I was your age, I started out with a dream,” Poteat said. “I made a game plan for myself and made it a reality.

“This too can happen for you; set goals, have a game plan and understand that anything is possible if you believe in yourself and work hard.”

Poteat said in college, all his Division I football colleagues thought they would saunter easily into NFL fame. But of his group of six close friends, Poteat said he and one other player were the only ones to make it to the big time, with the others falling prey to distractions like drugs — decisions that have yielded other consequences like their failure to earn a college degree and difficulty in finding work, Poteat said.

Poteat was drafted by the Pittsburgh Steelers in 2000 but was cut after his third season with the team. He then signed on with Tampa Bay but was cut again after a hamstring injury.

After the Panthers picked him up next, he broke his thumb and was cut again for the third time in three years. Ultimately, Poteat was cut eight times in the NFL.

“A lot of my friends and family told me to give up, but I continued to work hard, stay my course and believe in myself,” he said. “Then the New England Patriots called me, and we went to the Super Bowl that year against the Eagles. I was able to win my Super Bowl ring because I never gave up my dream or stopped believing in myself.”

Massive, shining ring in hand, Poteat recently accepted a coaching position with his alma mater, the University of Pittsburgh.

LaManna, a 21-year-old professional boxer from Millville, also shared his tale of triumph in the face of challenges that nearly took him out of the boxing game before he was even an adult.

As a bullying victim, LaManna found an outlet for his anger at a Vineland Boys & Girls Club boxing program, where he quickly excelled. By 17, he was ranked third best in the nation.

“Then I quit before my 18th birthday because I wanted to be a kid, I wanted to chill with my friends. I gave it up to become a street guy,” LaManna said.

He dealt drugs, got kicked out of his mother’s house, was turned away by his father and even a fellow drug-dealer, and found himself sleeping in his car. One of his friends shot and killed another friend. He finally reconciled with his parents after calling his mother “crying, sobbing like a little punk,” and then his grandfather, “my hero,” died of a heart attack.

However, LaManna refused to swirl down the drain to a life of crime and literally fought his way back to his path to success.

“If I can get over my obstacles, any of you can get over anything too. I got back on my school grind and graduated in 2011 from Millville Senior High School,” said LaManna. “I turned pro my senior year of high school and signed with Floyd Mayweather; now I know him as ‘Boss man’ and train with him in Las Vegas.

“I’m 21 years young, living the dream. I want to become a world champion. I want to be known as the best and a role model and inspiration.”

LaManna currently is 10-0 with six knock-outs and is going for an eleventh win at Resorts Casino Hotel in Atlantic City on March 8.

Michael DeLeon, president of Steered Straight Inc., also shared his history as an ex-con now working toward a master’s and a doctorate degree at Rutgers University. DeLeon acknowledged that “We have drugs and gangs in Cumberland County,” problems that sucked him in, endangered his family and took his freedom for 12 years.

“But you don’t have to be a part of that negativity,” he said.

“Who you decide to be is up to you,” DeLeon emphasized. “…Prison is not full of evil people, it’s full of people who made mistakes and bad choices.”

DeLeon pointed out that junior high school sets the stage for high school, for adult lives and each person’s destiny, which individuals can get closer to or further from by making good or bad decisions, he said.

“Your homework, your studies — that’s what’s going to pay you. I’ve never seen a college scholarship for Call of Duty or for chillin’.”

Though DeLeon admitted he is embarrassed to be forever branded an ex-con and wishes he could go back and make better choices, he asked students not to let his past become their future.

“You have your whole future ahead of you, and it’s all determined by two things: What you do and what you don’t do,” DeLeon said.

“Everything starts right here at the ExCEL academy.”