Survivor Who Lost Everything to Drug Addiction Shares Story of Recovery 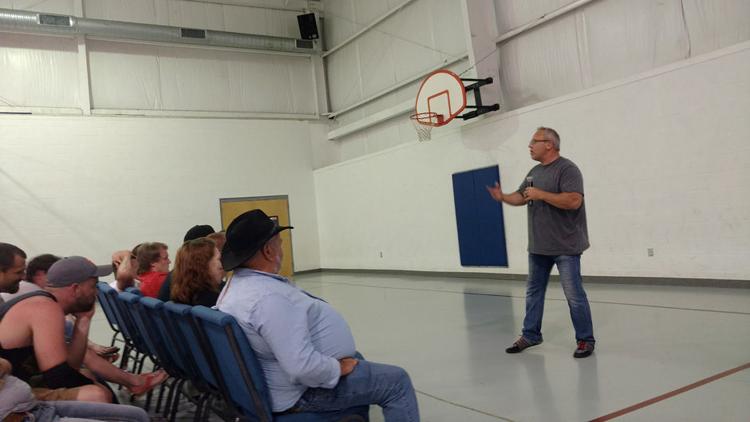 “I’m not supposed to be here. I didn’t have a drug problem,” he told several people at a Road to Recovery program held Monday at the Grace Lutheran Church Community Life Center in Bradford. Alcohol and Drug Abuse Services Inc. hosted the event led by the founder of the New Jersey-based nonprofit organization Steered Straight Inc.

Rather, DeLeon said, drugs were a symptom  –– but the underlying issues were not dealt with.

An addiction to caffeine pills led him to experience a seizure while driving, resulting in a serious vehicle accident. That experience was enough for him to change directions –– and eventually he moved from caffeine pills to cocaine, and then he combined cocaine and heroin,  DeLeon said.

He stole a laptop and broke into homes, all to support his drug habit. DeLeon also robbed gas stations for drugs. And DeLeon’s gang and drug ties resulted in his mother’s death. On Mother’s Day in 1995, she was discovered strangled to death, something he said he’s 100 percent responsible for.

“And I brought the madness and chaos into (my mother’s) life,” he said.

Now, with his past in the rearview mirror, he’s is a man on mission, feeling much more alive, thanks to a relationship with God, he said. DeLeon said he searched for meaning in drugs and alcohol and came up empty, every time.

“I think you can beat drugs and alcohol without God. But if you have God’s spiritual principles in your life you’re going to have a recovery beyond your wildest dreams. Because it’s not about getting clean. It’s not staying off the drugs. It’s about renewing your life and growing into the person you were destined to be, finding your purpose in your life.”

He said his life’s mission is prevention.

“I want to prevent kids from being me. Listen, you can be anyone else but not me,” he said.

DeLeon said he did not turn out the way he should’ve. But he said he considers himself a work in progress.

And to tackle being in the midst of a drug pandemic, he said people must come together.

He also told the audience that over the years he attended 192 funerals. In fact, four young people had two parents, were students part of National Honor Society and had college scholarships. Yet, they died because of an overdose.

DeLeon pointed to a trifecta gateway: Cigarettes and vaping, alcohol and weed; by using these people can move into the drug scene, he indicated.

“We’ve got to address the underlying stuff that never was discussed,” he said. DeLeon pointed people to “staying in your lane,” meaning being yourself, focusing on your education, having positive friends, making positive decisions, communicating with family, respecting yourself and others and staying away from alcohol and drugs.

“So you got to remember who you are,” he said. And he told the people assembled at the event that they matter. “Every single one of you,” he said. Steered Straight Inc. has reached more than five million students and thousands of adults in recovery facilities. Deleon is an award-winning filmmaker and has directed and produced four documentaries on addiction, focusing on the opiate and heroin epidemic in America, marijuana legalization and Addiction Recovery.

For more information about Steered Straight Inc., see www.steeredstraight.org. Angie Eckstrom, executive director of ADAS, said the event was planned to increase awareness of the dangers of drugs and reduce the stigma of addiction. She said ADAS offers the lifesaving drug Narcan for free; contact the agency at adasonline.org or call any office location.