The New ‘Just Say No To Drugs’

Sam Motsay, by all accounts, was your typical boy next door: honor roll student, basketball player, band member, devoted big brother. But on May 11, 2014, Mother’s Day, he made a decision — a decision that that took his life and shattered the future for his parents and younger brother.

“Parents tend to think, ‘That’s not my child. That’s not my kid,’ ” said Jeanine Motsay, Sam’s mother, in an interview. “But Sam was anybody’s kid.” 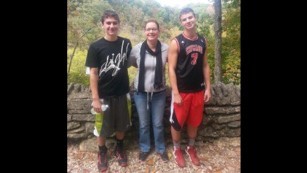 The Greenwood, Indiana youth, 16, didn’t have a long battle with substance abuse, his mother said. In his case, it was an initial experiment that went “terribly awry.”

Sam took a synthetic drug, a hallucinogen called 25I-NBOMe (also known as 2C-I-NBOMe). It is a drug designed to imitate the high from LSD and can be so strong that a dose just the size of a few grains of salt can be enough to get high, according to this CNN investigation.

Sam and two friends, who were all subject to random drug testing as athletes, had heard from their peers that LSD goes quickly through your body and wouldn’t be detected, said Motsay. So they thought they would try it, but what they were sold instead, without them realizing it, was the synthetic drug that turned deadly, she said.

Had Sam and his friends had information — any at all — about synthetic drugs that have flooded into the country in the past few years and how dangerous they can be, they might have made a very different decision nearly two years ago, she said. (Sam died; his friends survived.)

That is why she has devoted much of the focus of her nonprofit called Sam’s Watch to raising awareness in schools across the country about drugs.

“I think education is key to prevention,” said Motsay. “I mean that’s where it starts.”

Children may receive some anti-drug messaging through the D.A.R.E. program in elementary school, but research has shown that program has had no real impact on the rate of drug use.

What children need is education during their teenage years — in middle and high school — when their brains are still not fully developed to assess risk and when they are presented with opportunities to try and use drugs, Motsay and many other advocates and experts I spoke with for this story say.

“What we really want to do is get them the facts,” said Motsay. “They’re smart. They can take that information and they can work with it because I can guarantee you … if we’re not out there communicating with our kids, somebody else is and they’re giving them this information and that’s not what we want.”

Last year, Motsay encouraged more than 45 schools across Indiana, which included nearly 34,000 students, to hold drug awareness events during National Drug & Alcohol Facts Week. The weeklong national initiative sponsored by the National Institute on Drug Abuse seeks to provide teens and educators with educational resources and tools that they can use in the classroom to “shatter the myths” and address the consequences of substance abuse.

For this year’s event, beginning the week of January 25, Motsay says larger schools in Indiana have signed up to participate, 23 so far and counting, which includes over 33,000 students. One of those schools, Center Grove Middle School North (Sam attended Center Grove Middle School Central), will be holding a “SWaP Meet” — a meeting of Sam’s Watch and parents, organized by students from the National Junior Honor Society.

“We came up with this week six years ago. This is our sixth year,” said Brian Marquis, public liaison officer for the National Institute on Drug Abuse, referring to the weeklong focus on drug and alcohol education in schools across the country. “The idea really is to counteract the myths about drugs and alcohol that teens get from the Internet, from television, movies (and) music.”

Hearing from people whose lives were affected by drugs, along with professionals who can discuss issues such as the science of addiction, can be extremely powerful for teenagers, Marquis said. That is why at one of the National Institute on Drug Abuse’s signature events, a gathering of hundreds of high school students in Washington, D.C. later this month, Barbara Theodosiou, a mother who lost her son to drugs, will be among the speakers.

“With someone like Barbara, she has the real-life experience,” said Marquis. “I really think that’s a difference maker.”

Theodosiou, the founder of The Addict’s Mom, an online support community for mothers of addicts, plans to tell the students exactly what her son Daniel Montalbano lost out on when he started taking large quantities of cough medicine to get high at the age of 15. After countless overdoses and rehab visits, and jail time, he died at the age of 23.

“When you hear the story of Daniel’s life, stories are extremely, extremely powerful,” said Theodosiou, whom I have reported on in previous stories on the impact of addiction. “So we’re going to be sharing what did it cost our family, what did it cost Daniel, what do drugs do. When I share on their level the life of a person who’s not really far off from how old they are, I believe that they’ll be able to relate.”

‘I just want to educate kids’

Former addict Michael DeLeon says he is committed to trying to get in front of as many middle and high school children as possible.

He’s a former prison inmate who founded the nonprofit organization Steered Straight, Inc., which aims to provide motivational messages to young people about substance abuse, gang involvement and bullying. He’s also created powerful documentaries about the heroin epidemic in the United States, including “An American Epidemic” and “Kids are Dying.”

DeLeon has taken his student assembly presentation about drug awareness and prevention to middle and high schools, alternative schools, juvenile detention centers and treatment centers in 40 states so far.

Based on pre- and post-presentation surveys he does with students, he can tell the message is getting through. For instance, before the presentation, about 30% of students might say they would tell their parents if their friend was doing drugs. After the presentation, that number jumps to around 70%, he said.

Building on that success, DeLeon teamed up with two professors at Springfield College in Tampa to develop a curriculum based on the “Kids are Dying” documentary, which focuses on the heroin epidemic in New Jersey, what caused it and what can be done to solve the problem.

The two-week drug education curriculum will be rolled out in 10 schools and facilities across the country in February. Getting schools to implement this kind of curriculum is tough, DeLeon concedes, due to the culture of testing in education today and pressures on teachers, students and schools.

“If we can’t take instruction time away from these teachers, then how do we get it in to the kids? We’ve got to figure it out somehow,” said DeLeon. “And if we’re not going to give a whole semester, let’s give 10 days … We have to give these kids this education. We just have to.”

What works, what doesn’t

In Maryland, students are required to take a health education class before graduation, which includes a unit on drugs and is usually taken in the 9th grade. In addition, in Carroll County, Maryland, every 11th and 12th grader is getting some additional education by attending assemblies, which started this school year and were created as part of a special county task force on opiates.

Students hear from education and law enforcement officials, but also from a mother in the area who lost her son to a heroin overdose and a former female and male student who were heroin addicts and are now in recovery, said Dawn Rathgeber, assistant supervisor for health education, K-12, for the Carroll County school district.

“We try to make it very relevant to the students, and we don’t preach, ‘Don’t use. Don’t use. Don’t use,’ ” said Rathgeber. “What we’re preaching is, ‘Hey this is out here.’ Of course, you want risk avoidance but we want to also promote, ‘If you know someone, help them.'”

Since the assemblies — done in conjunction with the state’s attorneys office — started, there have been “numerous” referrals of students referring other students who need help, said Rathgeber. One school, after an assembly, received three referrals, which led to counseling for two students and treatment for another, she said. “We also have students who say, ‘Look my mom’s using or my dad’s using. This is scaring me,’ and it gives them somewhere to turn for help.”

The school district also is running a drug awareness poster contest, funded by drug forfeiture monies. The student with the winning poster at each school gets $250, with the overall county winner getting $1,000 and seeing their poster used as part of a drug education campaign.

Instead of trying to shovel the anti-drug message down kids’ throats, the goal here is providing direction, said Rathgeber.

Theodosiou of The Addict’s Mom said schools need to create environments where students feel safe talking about drugs and the topic is no longer taboo.

“We have to say, ‘It’s OK, tell me the truth. Have you used drugs?’ We have to stop saying, ‘You can’t tell me this because I’m going to judge you,’ ” she said. “What happens is things become more normal. The more times you hear it … the less you are afraid to come out.”

Added Rathgeber, “If you help one student, it’s worth it. The whole thing is worth it.”

‘The only bracelet I wear’

Last year, Motsay spoke at four different locations around Indiana, talking about Sam and the incomprehensible pain following his death. In December, she received a message from a parent advocate who lost his son to prescription drugs and who speaks around the state like Motsay.

He did a small presentation at a high school and handed out bracelets and lanyards. A woman came up to him and said she didn’t need a bracelet, just a lanyard. “This is the only bracelet I wear,” the woman said, according to Motsay. It was a Sam’s Watch bracelet.

“You made a big difference in this young lady’s life,” her friend, Dustin Noonkester of Brady’s Hope, wrote her on Facebook. “Pills weren’t her thing, nor was heroin. She was all about the synthetics but you changed all that. You and Sam changed that one life we’re always trying to change,” he said.

“So again, you never know how what you’re going to say is going to impact somebody but it can make a big difference,” said Motsay, who said Sam would have been a senior this year, gearing up for graduation and likely preparing for college.

“He’s not part of that,” she said, reflecting on how her younger son has reached an age and grade that Sam will never see. “Maybe it won’t be so hard” a few years from now, she said, “but you never know.”

By: Kelly Wallace
What do you think schools should be doing to educate teens about the dangers of drugs? Share your thoughts with Kelly Wallace on Twitter @kellywallacetv or CNN Parents on Facebook.