The Key Biscayne fire department is used to dispatching help from within its walls, but Chief Eric Lang never knew his station would become the proverbial living room in which families are sitting down to have the all-important discussion about drugs and alcohol.

“A year ago, if you would have asked me if Key Biscayne would be involved in addressing a drug issue, I wouldn’t have said this is what I’d be doing – it’s not something we expected to be dealing with,” Lang said. But part of Lang’s mission as Fire Chief is to respond to public safety needs as they present themselves, and when he and Police Chief Charles Press noted a dramatic uptick in the number of drug, alcohol and suicide calls they were responding to, they knew they needed to take action.

They started with a big town hall-style meeting at the Key Biscayne K-8 Center, moved onto a series of smaller open forums at churches and other spots around the island, and have now started hosting intimate small-group meetings out of the fire station. “We’ve been in front of over 500 families since last October,” Lang said. “This is the living room conversation we need to be having – it’s just happening in the fire station. 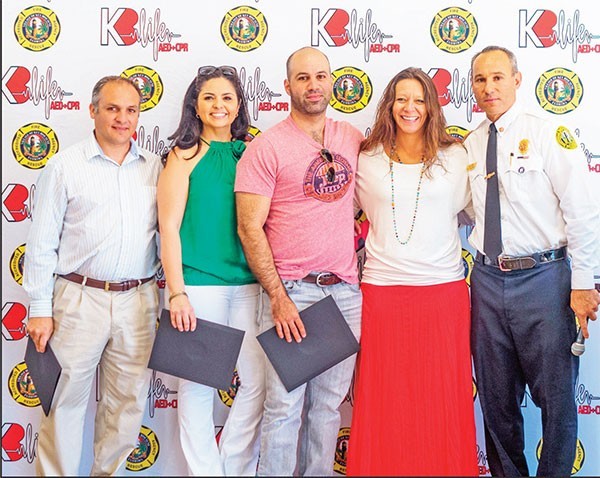 Most of the cases Lang and Press noticed involved heroin or other opiates, and Lang has not only seen a downtick in calls, he’s personally witnessed young people getting the help they need. “I think we have a pretty good handle on what was happening regarding the heroin overdoses,” he said, noting officials discovered a huge part of the problem is the prevalence of prescription drugs, a common gateway to heroin. Even families that don’t have the medications in their own homes saw their kids fall victim due to friends who have access, Lang said.

The Village has tackled the problem by educating parents how to keep prescriptions out of teens’ hands and helping them dispose of unused medications – the Police Department offers a 24/7 disposal drop box at its dispatch center. All in all, Lang said the message of hope and help has started to take hold: “We’ve been able to get help to the individuals and families that need it.”

Doing so has involved treading a careful path that involves listening to what fami lies need and finding the solution they’re most comfortable with. “There are a lot of resources out there,” Lang said, and from his perspective, it doesn’t matter if a family wants to work with him, clergy, counselors, etc. “All that matters is that those individuals and families are getting the help they need.”

To that end, Lang assembled a diverse team to meet people where they are by leading the small-group sessions at the fire station. Lang recruited “the coaches,” Flip De Varona, Tony Goudie and Eddie Blanco from the Village youth athletics program, to provide a younger perspective that kids can relate to. He met psychologist Marie Guma from Lakehaven Recovery Center through her sister, Key Biscayne K-8 Center PTA President Johanna Guma-Aguiar; and Guma brought in recovery coach Joe Fiorello from Advanced Recovery Systems. Together, they offer a clinical perspective.

Sylvie Elmoznino, the fire department Community Outreach Liaison, is the first point of contact for the group, which meets every other Wednesday from 7-9 p.m.

While each session is different, Lang said, there’s always discussion on substance abuse and issues like peer pressure, family pressure, and both real-life and social media bullying. Meetings are 100 percent confidential and non-judgmental, with the goal being to facilitate a conversation. Guma said sessions are participant-driven, as a parent gets a group of about six kids and six adults together. Each session starts with everyone together, then splits: Guma, Fiorella and Lang meet with the parents and de Varona, Goudie and Blanco meet with the kids. Guma educates parents on the warning signs of drug abuse, how to talk effectively to their kids via roleplaying and non-emotional reactions, and where to turn for help if needed. She also lays out the science of how alcohol and drug use affects a young, developing brain – a crucial step, she said, since many cultures feel it’s OK for kids to have a drink as a young teen. “I’m from Venezuela, and sharing a beer or glass of wine with a parent was acceptable,” she said. “I don’t want to tell parents what they should or shouldn’t do, because culturally people have different views. I want to give them the scientific view, and they decide. We’ve eliminated the culture gap by using science.”

Meanwhile, in a different part of the firestation, with just the coaches and kids in the room, de Varona finds teens talk more openly. There’s less of a generation gap, and the relationship is positive and fun: “They open up a lot more about issues at school and peer pressure and what they’ve seen and experienced,” he said. “We work hard to build relationships with them in that time, and we let them know if they need someone to reach out to, there’s always us.”

Everyone in the group is volunteering their time, Lang noted: “I can’t put into words how much I value that all of these people have taken time away from their families to spend time with other families and share this message with teens,” he said.

Guma turned the praise back to the fire chief, noting it’s unheard of for a public official to give his own time to personally tackle a community’s substance abuse issues. “What Chief Lang is doing is the most honorable thing. This is an initiative he’s taken on in his personal time, and he’s dedicated himself to it almost like he’s added another full-time job,” she said. “It’s beautiful what he’s doing.”

Moving forward, the group hopes to build on its progress. Guma said with drug calls dropping off, they want to address the use of alcohol at a young age: in an informal survey, she learned that by age 15 almost all kids on the Key have either tried sips of alcohol or been pressured to do so.

By age 13, almost all have witnessed drinking or drug use at a party on the island. Lang said he’ll continue to open the fire station doors to whoever needs help, and is encouraged by how Key Biscayne seems to be embracing a holistic solution – entire families are involved in getting teens the help they need. He wants to build on that by continuing community outreach through programs at schools, churches, etc., and encouraged any family that would like to set up a small group meeting to get in touch with Elmoznino at .

“This will always be a grassroots effort,” he said. “Our goal is to get more people involved.”